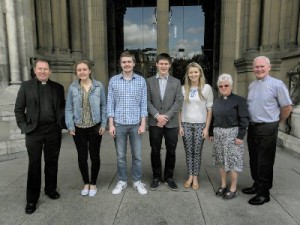 The Queen’s University interns who have been working in St Anne’s with Cathedral Clergy Dean John Mann, the Rev Janice Elsdon and the Rev Campbell Dixon.

Three of them were based in the Cathedral for a month. Eleanor Ford, an English student, was doing research in order to produce printed materials, and history students Paddy McAlary and Andrew Poxon focused on the stonework in St Anne’s, with Paddy looking in particular at the pillars, and Andrew at the West front.

The fourth intern, Music student, Rachel McCombe, is doing an Education internship which will continue for another two months.

Cathedral staff said farewell to Eleanor, Paddy and Andrew over a cup of coffee last week. The Dean of Belfast, the Very Rev John Mann, and intern co-ordinator the Rev Janice Elsdon thanked the interns for all their work.

The Dean said that the materials and leaflets produced by the interns would be used in the Cathedral and in time would be translated into other languages. He also commented on the way that they had worked together so well as a team.

Eleanor, Paddy and Andrew said how much they had enjoyed their time in the Cathedral and expressed their gratitude for the opportunity to spend a month working in such a beautiful building.

Paddy said: “The internship itself was both interesting and incredibly useful, it gave me a chance to observe the evolution of the Cathedral over a long period of time and the effects that various different architects and sculptors had on the creation of the pillars.

“The chance to engage in genuine research was an incredible opportunity, being granted access to the archives was an enlightening experience. It revealed interesting facets of the Cathedral’s history that added to the human character of the building.”

Eleanor, who created a series of leaflets to accompany various artefacts in St Anne’s, said : “It has been great to spend time studying some of the Cathedral’s most treasured items and to discover their respective histories. I particularly enjoyed exploring the Cathedral’s archives and learning more about the craftsmen and women who have contributed over time to the Cathedral.”