Archdeacon on the airwaves 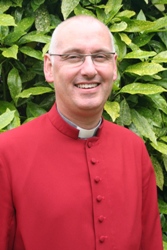 The Archdeacon of Connor, the Ven Dr Stephen McBride, featured on BBC Radio Ulster’s Thought for the Day on Sunday August 16.

Archeacon McBride, who is Vicar of Antrim, will also be on Thought for the Day for the next three Sundays, August 23, 30 and September 6.