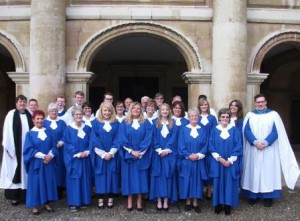 The choir of St Polycarp’s Parish Church, Finaghy, travelled to Cambridge for its summer tour, singing Choral Evensong in the Chapels of Trinity, Emmanuel and Queens’ Colleges.

On the Sunday morning of their visit, choir members, accompanied by spouses and relatives, attended Sung Eucharist in the iconic setting of King’s College Chapel.

On the Sunday evening, the choir, conducted by St Polycarp’s Director of Music, Simon Neill, sang Evensong in Emmanuel College, which included Harwood’s settings of Magnificat and Nunc Dimittis in A flat and the anthem, Greater love hath no man, to a setting by John Ireland.

In Queens’ College on the Tuesday evening, Evensong included Philip Stopford’s St Polycarp Evening Canticles – which had been commissioned by Mr Neill in June 2013 in honour of St Polycarp’s choir’s President and Honorary Patron, Suzi Digby (Lady Eatwell) OBE – and the anthem, I was glad, by Parry.

The service in Queens’ was led by the College Chaplain, the Rev Tim Harling, who said that the choir had ‘excelled in support of the liturgy in their sacred, prayerful and yet dynamic delivery.’ 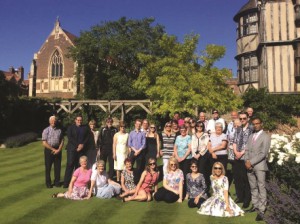 Members of St Polycarp’s choir with some spouses and relatives are pictured in the garden of Queens’ President’s Lodge at a garden party hosted by the choir’s President, Lady Eatwell (sitting, extreme right). St Polycarp’s Director of Music, Simon Neill, is standing, 2nd left, and the organist on the tour, Tyrone Whiting, is standing, extreme right.

Prior to the Tuesday evening service, the visitors were entertained at a garden party hosted by Lady Eatwell at her home in Queens’ President’s Lodge. Her husband, the economist, Lord John (Baron) Eatwell, is President of Queens’ College.

Speaking following Choral Evensong in Queens’, Lady Eatwell said that she had welcomed this ‘exceptional choir’ to Queens’ with the greatest pleasure and, especially given her presidency of the choir and the canticles which had been commissioned in her honour, said the pleasure of experiencing its singing was ‘very personal.’

Lady Eatwell continued: “Although Queens’ College is one of the great ancient colleges of Cambridge, founded in 1448, our Chapel was built by the renowned Victorian architect, George Frederick Bodley, and has one of the most outstanding acoustics in Cambridge.

“The choir sang with great quality, commitment and passion under the skilful direction of Simon Neill.”

Simon said that members had  had a wonderful experience, ranging from singing in the College Chapels to sightseeing around Cambridge itself and punting on the River Cam.

He described the choir as one large talented family with a great musical and social life. “As always I was extremely proud of its achievements and wonderful music making in Cambridge,” Simon said.

He added: “In thanking the members of the choir and those spouses and friends who accompanied them, I would also like to pay tribute to our organ accompanist, Tyrone Whiting, who is Director of Music at St Mary’s parish church, Battersea, London, and a former organ scholar of Nigel McClintock, Director of Music at St Peter’s Roman Catholic Cathedral, Belfast.”

For the past two summers, the choir of St Polycarp’s has sung Choral Evensong in Westminster Abbey.