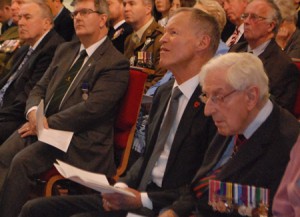 Veterans and politicans were among those who attended the Galliipoli Service in Lisburn Cathedral.

Hundreds of people attended a memorial service at Lisburn Cathedral to mark the centenary of Gallipoli, one of World War One’s bloodiest campaigns.  About 21,000 British and Irish troops lost their lives in the doomed Gallipoli operation.

Both unionist and nationalist politicians attended the service on Sunday August 9.

Those present included Sinn Féin assembly speaker Mitchel McLaughlin and DUP MP Jeffrey Donaldson.  They both talked about the need for communities in Northern Ireland to “mark our shared past together.” 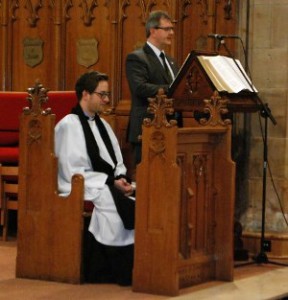 Mr McLaughlin said: “In the context of the upcoming centenaries of the Battle of the Somme and the Easter Rising in Dublin, I think we should begin to look at these commemorations with a different perspective.”  He said people should be encouraged to “explore, appreciate and respect our shared history.”

Mr Donaldson said that in order to have a shared history then “we need to understand our shared past.”

“There are many things that divide us in this society but commemorations are one of the things that can draw us together,” he added.

The memorial service was led by the Rev Simon Genoe, and the Rev Canon Dr William Murphy delivered a powerful address on the Biblical promise in Micah 4 of a ‘world without war, without the means of war and without the mentality of war.’ 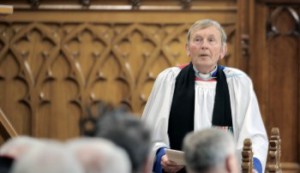 One of the most memorable elements of the service was the presentation of a bible to the Australian High Commission.  The background to the story was that the Bible had been lost by a wounded Australian solder at Gallipoli and found by a serviceman from Northern Ireland.

Simon, who is Vicar of Lisburn Cathedral, said: “It was a pleasure and a privilege to be part of a commemoration that honoured the past, celebrated the Gospel, and prayed hopefully toward a peaceful future.”