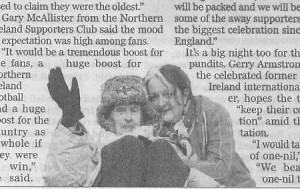 Canon Edgar Turner, Senior Registrar for the Diocese of Connor – and a huge fan of the Northern Ireland football team – was making the news today!

At 95, Canon Turner is set to turn out to support the NI team against Hungary at Windsor Park tonight – having just returned from the Faroe Islands where he travelled to watch the Northern Ireland players chalk up a 3-1 victory on Friday.

In an interview in today’s Belfast Telegraph (Monday) Canon Turner said the trip to the Faroe Islands had been ‘tiring’ but worth every minute.

Canon Turner can’t say if he is the Northern Ireland team’s oldest fan, but regardless of his age, no one can deny is one of the team’s most dedicated fans!

Read the full Belfast Telegraph story on the paper’s website.