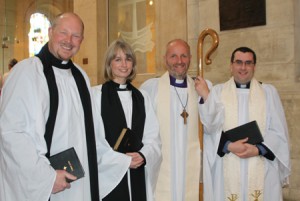 The Bishop of Connor with new priests, from left: the Rev Cameron Jones, the Rev Julie Bell and, far right, the Rev Philip Benson.

Three new priests were ordained in Connor Diocese by the Bishop of Connor at a service in St Anne’s Cathedral, Belfast, on Sunday September 6.

The preacher at the Service was the Rt Rev Ken Good, Bishop of Derry and Raphoe.

Julie served her internship in Glenavy Parish. Born and raised in Belfast, she was a pupil of Victoria College. During her teenage years she was a violin student at the City of Belfast School of Music, and at 16 began organ lessons through the Church of Ireland Down and Dromore and Connor Organ Scholarship Scheme. At 15 she committed her life to Christ and was confirmed in Knockbreda Parish Church.

Julie went on to study music at Queen’s University Belfast, completing a BMus and an MA, in which she specialised in violin performance and performance practice research. During her final two years at Queen’s she was leader of the Ulster Youth Orchestra.

Following university, Julie worked as a freelance violinist and teacher. She began work as organist and director of music in Bangor Parish in 2004 and then in Hillsborough Parish in 2008. It was during these years she began to discern a calling to ordained ministry.

In 2012 Julie began training for ordination at the Church of Ireland Theological Institute, and was ordained deacon in September 2014. She is a member of the Church of Ireland Liturgical Advisory Committee, and worked on the subcommittee which prepared ‘Thanks and Praise,’ a supplement to the Church Hymnal which was published earlier this year. 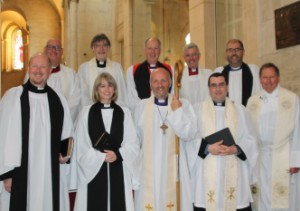 The newly ordained priests with the Bishop of Connor and the Bishop of Derry and Raphoe (preacher) and other clergy at the service of ordination in St Anne’s Cathedral on September 6.

Phillip, who served his internship in the Grouped Parishes of Finaghy and Upper Malone, is married to Carolyn. From Bangor, Philip grew up attending Carnalea Methodist Church, where he was a member of the BB, attended the YF and later became a leader.

He went to school at RBAI and studied theology at Queen’s University, Belfast.

After graduating Philip worked for Goldsmiths Jewellers while completing a theology Master’s Degree part-time. In 2009 he began working as a youth worker full time, while also helping to lead the youth group at St Gall’s Carnalea. Around this time Philip began to explore his vocation and he was accepted for training in 2012. His interests include football movies, music and history.

Cameron was born in Sydney, Australia. He attended Sydney Church of England Grammar School (Shore) and then studied at the University of Sydney, receiving a BA in Studies of Religion, Sociology and Education and then a Diploma of Biblical Studies at Moore Theological College.

In October 2005 he was employed by a Church of England parish in Hampshire as assistant minister, and in 2008 began serving as Lay Curate at All Saints, Belfast, with responsibility for discipleship and evangelism – including oversight of student and international student outreach.

Committed to long-term ministry in Ireland, after training Cameron served his internship at St Nicholas’ Church, Carrickfergus.  He is married to Alex.