Special Evensong for Her Majesty was ‘a chance to be inspired’ 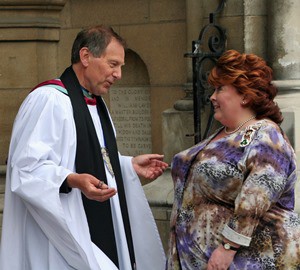 The Dean of Belfast, the Very Rev John Mann, greets Lord Lieutenant Mrs Fionnuala Jay O’Boyle as she arrives for the special Evensong on September 9.

A special Evensong in St Anne’s Cathedral celebrated the day that Her Majesty The Queen became the longest serving Monarch in British History.

On September 9, Queen Elizabeth II passed the record of her great-great grandmother Queen Victoria, who was on the throne for 63 years and 216 days.

A prayer written especially for the occasion, approved by Her Majesty, was said in St Anne’s and churches and cathedrals across the UK.

The words, intoned by the Dean, the Very Rev John Mann, were:

Almighty God, who hast set our gracious sovereign Queen Elizabeth upon the throne of this realm, and given her to surpass all others in the years of her reign: Receive our heartfelt thanks for her service to her people, confirm and encourage her in the continuance of the same and keep her in thy heavenly wisdom; through Jesus Christ our Lord, who took the form of a servant for our sake, and reigneth now in glory with thee and the Holy Spirit, one God, world without end.

Her Majesty’s Lord Lieutenant of Belfast, Mrs Fionnuala Jay-O’Boyle CBE, was among those who attended the service, which began at 5.30pm, the time widely recognised as being the moment Queen Elizabeth II became Britain’s longest reigning Monarch.

Mrs O’Boyle said it was an ‘extraordinary pleasure’ to be at the service on this ‘very historic and joyous occasion.’

Mrs O’Boyle said Her Majesty had contributed much to ‘peace and reconciliation on this island.’

People had travelled from the city and beyond for this special Evensong, which opened with the National Anthem.

Dean Mann said the excitement in the Cathedral was palpable as people gathered to celebrate this historic milestone.

“People generally felt, as I did, that the moment upon which Her Majesty the Queen became the longest reigning British monarch held a special significance,” said the Dean.

“Some have identified this with the Queen providing stability in more than half a century of considerable change, for me it is more than constancy, it is devotion to God and to her people; the virtues of service and long term commitment; the placing of duty above personal desire.  These virtues reflecting through her approach to high office her complementary deep Christian faith, are an example that it is not beyond our very different situations to both admire and model.”

The Dean spoke of the atmosphere during the service.  “As the ancient texts of the Magnificat and Nunc Dimittis soared around St Anne’s to Wood in E flat Major, then Woods’  familiar anthem ‘O thou, the central orb’ brought its regal feel to things, so too did the special prayer for the occasion and the final hymn ‘I vow to thee, my country’.”

Dean Mann added:  “The occasion was an important one to note, but even more, as a chance to be inspired, to aim at greater things, and to give thanks.”