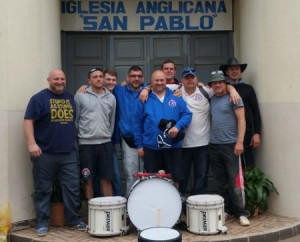 The Flute Band Church team at the Church of San Pablo, Concepción, Paraguay. For lots more photos visit our Gallery at the bottom of this page.

The Paraguayan city of Concepción had never seen anything quite like it! A bunch of men parading through its streets playing hymns in a blood and thunder style on flutes and drums – while waving a large Northern Ireland flag!

This was mission Flute Band Church style – and the team of nine from Muckamore Parish found that while they may have made some things structurally better for the community of the Church of San Pablo (St Paul), it was their own lives which were perhaps most deeply touched.

The band travelled to Paraguay with SAMS, the South American Mission Society, in July (after the Twelfth!). Led by the Rev William Orr, rector of Muckamore, Killead and Gartree, the group travelled via New York and Brazil and reached Concepción after a six hour bus ride.

Their first day, a Saturday, was spent clearing land and doing repairs on a house that doubles as a church on Sundays. They took part in a parade, and Saturday evening ended in the church for a short service attended by 38 children. 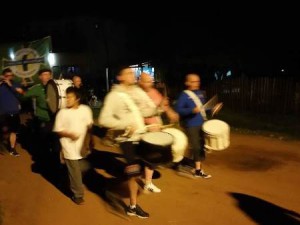 Flute Band Church members on parade through the streets of Concepción.

The musicians played again – the team comprised both flautists and drummers – and the children were told the story of the Prodigal Son.

Band members were back in action again in church on Sunday and afterwards they enjoyed football with local teenagers, which William said was a ‘great experience and very humbling.”

They continued working at Villa Alta, the house / outreach centre, repairing a very leaky roof and building a large sheltered patio. They added outdoor lighting, and brought plumbing into the house so it had a flushing toilet and working shower and hand basin. This was tough manual work, clearing land, digging mud and stones, clearing a sewer, woodwork and painting.

When the jobs were complete, they went door to door, inviting local people to come and celebrate at Villa Alta.

The group then travelled to Horcueta, to clear church land they dubbed ‘the Jungle.’ This involved more hard labour but the local people were keen to help out.

The team spent a day with the native Indian community in the Chako where they got to know local families, and organised fun and games for the children.

They had help with translation and other activities from Lisburn woman Natasha Conway, who works with SAMS in Argentina, and from Clare Holmes, another SAMS missionary whose outreach work is primarily with children and young people.

Team member Andrew Chestnutt preached in church on their second Sunday in Paraguay, and each evening the band members held noisy parades along the streets, much to the delight of the local children.

The trip was funded by the individual team members with help from fundraising activities including a golf day, go-kart racing, a breakfast, church café and a worship band night. They also wrote to Orange Lodges and Royal Black Perceptories in the Co Antrim area who financially supported the mission trip, as did a couple of Apprentice Boys Clubs.

When the nine men prepared to board their bus back to the airport, the entire church community turned out to see them off. There were tears on both sides.

At a SAMS debrief meeting in Muckamore on September 15 with SAMS Mission Director, Bishop Ken Clarke, team members reflected on the challenges they faced, how God had used then while they were away, their highlights, what had shocked them, and how their experience has affected them.

Members of the team also shared some thoughts about their trip with Connor Communications Officer Karen Bushby.

Drummer Paul Moorman, a Co-Op Area Manager, said it had been fantastic. “We achieved everything we set out to do or wanted to get out of it,” he said.

“For me it was a lot about giving something to people who you knew would appreciate anything that you did for them. That was one of the big eye openers, they were so appreciative no matter how small a thing you did.”

Paul admitted to being quite shocked when we first arrived, especially by things like raw sewerage in the streets. “We had been prepared beforehand but there was still a lot of bewilderment when we saw the conditions some of the people were living in,” he said.

“But we all got it together and realised that anything that we did here was better than what the people had.

“I spent some time just looking through pictures on my iPad with some of the kids. It was great to hear them laughing and carrying on with each other. They are very like us. They have the same sense of humour and laughed at us which was nice!”

Paul said that despite the poverty many people had mobile phones. “The young ones downloaded a translation app which helped us communicate. We took some footballs out with us and gave them to the kids and it was like we had given them a million pounds.”

Andrew Chestnutt, who plays the flute and is a Shipping Officer at Belfast Docks, said he had always wanted to go on a mission trip but was never in the right place at the right time.

“The fact that the band was doing something different also made me want to be involved,” Andrew said.

“It took a while to get used to the noise and the busyness of life in Concepción. We worked on a number of different sites, and the further we moved from the city centre the more apparent the poverty. One day I chose to walk from the church to the place we were working. It gave me a chance to really take in everything around me. I felt safe, but my eyes were opened a lot more.”

Andrew said the highlight of his trip was spending time with the young people. “Some of them wanted to learn to play the flute, so I spent several evenings teaching them. They had no English and I only had pigeon Spanish but we struggled through. I gave one of the girls a flute to take home one evening and she taught herself some tunes and stood up and played them in front of the church on our last night,” he said.

“Church in Concepción is a lot different. Here, when church finishes here the doors close and the lights go out. There the lights are always on and church doesn’t stop, especially for the young people who are always in there chatting and playing music.

“I learned a lot from the people there. My relationship with God has solidified. I was very much out of my comfort zone and I had to rely on God to get me through each day.”

Flautist David Olliver, who works at Lidl, said the trip had been brilliant. “It was a real eye opener to see the way they live there compared to how we live. Our life is all about working and money. For them it is family and home. It is something I have tried to reinforce back here. I was working stupid hours before I went to Paraguay and I have cut my hours back. What is important is family.”

David said he had enjoyed all the tasks the team carried out. “It was very hands-on and we were very aware of the gratitude for everything we did, especially after putting the roof on the outreach centre. It was just painting and building shelters, but their gratitude was unbelievable,” he said.

“We played music every day. At the start we were a bit nervous about the whole thing but soon they were calling for more! When we paraded we were like the Pied Piper with a load of kids following us. As well as parading around the streets, we also played in the church.

“One of the highlights for me was leaving. The whole church community came to see us off. They wanted to help us with our bags, they said we had done so much for them. One guy, Diego, gave me his guitar pick as a souvenir.”

For David, another highlight was seeing the native Indian community in Chaco. “It was really just a couple of homes off the main road. The houses were like tents, and there was literally nothing there. That really hit home for me,” he said.

“The kids didn’t go to school, and they had so little that even the dogs were skin and bone – there was nothing for them to scavenge. We had brought three suitcases of clothes and bags of bread. Everything disappeared and their gratitude was unreal.”

At the debrief with Bishop Clarke, there were amusing stories about bus travel in Paraguay and memories of moments that were special to different members. The joy of the young people given football shirts donated by Antrim Rovers, a special Bible study, strange forms of sign language used to order beef in a café where no one spoke English, recording a children’s talk after a band parade to a new church.

There were challenges too – a delivery of a brown clay substance used to cover boggy land at Villa Alta blocked the sewer for the whole street, deliveries which took forever to arrive, visiting neighbours and finding in the absence of doorbells a hand clap outside was the way to bring the householder to the door.

“There were a lot of God moments,” said William. He added: “I just want to say a huge thank you to all the guys, the three Pauls, Andrew, David, Raymy, Porky and Samuel for their support and effort, and I was both proud and humbled to take you all to Paraguay.

“I trust that this will be the beginning of ordinary men and maybe women, in the future, who love the bands, contributing to the building of His Kingdom for many years to come.

Following the success of this 2015 mission, Flute Band Church is considering returning to Paraguay in 2017.

William has been rector of Muckamore, Killead and Gartree since 2007. A survey carried out by Muckamore Parish Development Association found that the estates which constitute the parish were 93 per cent Protestant, with less than 10 per cent of people practicing their faith in local churches.

“When I came here my prayer was ‘what’s culturally relevant, what is the most important thing to people living here?’ There was my starting point,” William said.

This prompted William, who had been a proud member of a flute band in his native Rathfriland before entering the ministry, to found Flute Band Church. The band plays hymns, many in a blood and thunder style common to flute bands, in church and at other events.