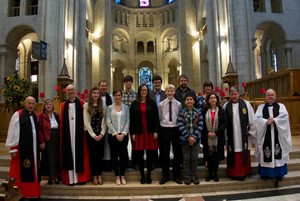 On September 20 a special thanksgiving service was held in St Anne’s Cathedral, Belfast, to mark the 25th anniversary of the Down and Dromore and Connor Organ Scholarship Scheme.

The scheme helps provide and equip organists for public worship. It was established in 1990 when an anonymous benefactor, recognising the importance of the ministry of music in parish life and worship, provided a very generous endowment to train organists in the two dioceses.

A Trust was set up and administered by the Church of Ireland Trustees and a Board of Management, comprising 10 people, was formed to operate the scheme. Inspired by a common purpose, the scheme has been blessed by the expertise and dedication willingly offered by all those who have and who continue to serve on the Management Board.

Three of the current Board Members have served for more than 20 years, and one member, Lady Brenda Sheil, has been a member of the Board from its establishment. Lady Sheil undertook the role of Honorary Secretary in 1990 and remained in that post until 2004 when she became Vice Chair, an office she has continued to fulfil with her customary enthusiasm ever since.

Another member of the original Board, Mr William Adair, served for 15 years until his retirement in 2005 but is still actively involved in playing the organ for services in his 94th year.

Not only has this level of dedication served the Organ Scholarship Scheme well, but the musical expertise and passion for church music has ensured that the organ scholars have been provided with the best opportunities to develop their playing and choral training skills. Fundamental to this has been the high standard of tuition provided. 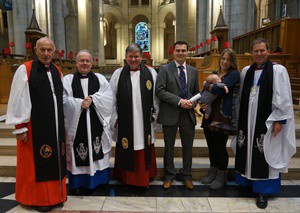 Mr David Shephard, who received his certificate for completing the Organ Scholarship Scheme at the service, with his family, and clergy, from left: Bishop Edward Darling, the Rev Canon David Humphries, The Very Rev William Morton, Dean of Londonderry, and (right) the Very Rev John Mann, Dean of Belfast.

The investment income arising from the endowment made it possible for some of the church’s top organists to have been engaged as tutors over the years. Mr Michael McCracken of Down Cathedral was one of the first tutors appointed in 1991 along with the then organist of St Anne’s Cathedral, Mr David Drinkell.

Mr McCracken continues to provide the scheme’s scholars with expert tuition and the benefit of his great experience. Recently he has been joined by Dr Joe McKee OBE, who also served as a board member during the first four years of the scheme.

A third tutor, Mr Ian Mills, organist of St Columb’s Cathedral, Londonderry, will shortly be commencing training for ordination at the Church of Ireland Theological Institute, but will continue to provide lessons for the time being.

Over the years other notable organists and musicians have served as tutors. They include the late Dr Donald Davison, Mr Philip Stopford, Mr David Stevens and Mr Reggie Patterson.

One of the principal strengths of the Organ Scholarship Scheme has been its versatility. This has allowed the tuition provided to be centred around the needs and abilities of the individual scholars so that each is helped to progress musically and to gain confidence not only in playing the organ but also in leading a choir.

The tuition provided is also sensitive to the diversity of music which exists in the public worship of the two dioceses and also to the diversity of instruments available to play. Consequently the scheme has always adopted an open application system operated through parishes, encouraging applications from both young people and adults.

Generally applicants are expected to have reached the standard of grade 5 on the piano and be active in the musical life and worship of their parish. All applicants also require a recommendation from their rector, and to facilitate this all incumbents are sent information on the scheme and application forms on an annual basis.

Applicants are auditioned each June and successful candidates commence their tuition in the autumn. Progress is assessed annually and scholars who successfully complete the three years of the course are awarded a certificate of achievement at the annual awards service.

Over the 25 years of the scheme more than 90 parishes from the two dioceses have sent forward applicants, 133 scholarships have been awarded and to date 97 scholars have successfully completed the course. These statistics, however, do not fully capture the immense benefit of the scheme for the individual scholars and for the church as a whole.

The current chair, the Rev Canon David Humphries, said: “The scheme has helped to develop the musical skills of many talented young people over the years who have not only become fine organists, but also made music their career.

“In addition the scheme has helped many adults who perhaps started out as ‘reluctant’ organists but who gained the confidence and skills not only to enjoy the organ but to share that enjoyment through the enrichment of their parish worship.”

Although educational pathways have led some of the scheme’s younger scholars to playing opportunities farther afield, the scheme continues to support the ministry of music within the two dioceses. Currently, upwards of 30 full-time and committed parish organists are musicians who have benefited. One ex -scholar, Mrs Anne Tyler, described the scheme as ‘brilliant.’ She is not alone, as gratitude for the scheme is the common consensus of all scholars, and what is most pleasing to the Board is that specific reasons for that gratitude differ from scholar to scholar, reflecting its inclusive and all-embracing ethos and approach.

The 25th Anniversary Awards Service in St Anne’s was truly an occasion for thanksgiving. Current and ex-scholars were in attendance along with past and present members of the Board. The address was given by Dean of Derry, the Very Rev William Morton, himself a very accomplished organist.

Ten new scholars were formally welcomed by the Right Rev Alan Harper, former Archbishop of Armagh and a past member of the Organ Scholarship Management Board. The congregation was reminded by both speakers of the vital importance of choral music to the worship of the Church of Ireland and the need to maintain the long tradition of Anglican choral tradition.

One scholar, David Shephard, who has successfully completed the course, was also awarded his certificate. The continuing scholars are David McClellan, Tara Devers and Miriam King.

Refreshments after the service provided an informal setting for the fellowship of the scheme to continue.   Canon Humphries thanked the Dean of Belfast, the Very Rev John Mann, and the Cathedral staff for once again generously hosting the Organ Scholarship awards service and paid tribute to Mr David Stevens (Master of Choristers), Mr Ian Barber (Organist) and the Cathedral Choristers whose musical offering had so beautifully enhanced the worship of all who had gathered to give thanks to God.

Canon Humphies also thanked the team of ladies from St Molua’s Parish who had kindly volunteered to help with the refreshments.

He said: “Our prayer is that the scheme will continue to serve the needs of parishes within the two Dioceses for many years to come and that parishes will in turn support the efforts being made to help provide music in the public worship of Almighty God.”

The current Board of Management is: