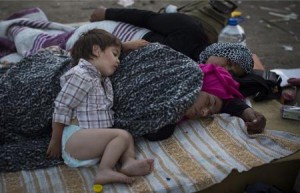 The Archbishops and Bishops of the Church of Ireland are seeking engagement with governments in response to the refugee crisis in Europe.

In a statement issued today, September 23, the Archbishops and Bishops of the Church of Ireland said the current refugee crisis presents a challenge not only for governments, but for Christian Churches.

“Along with many others, we are acutely aware that the current refugee crisis in Europe and the Middle East presents a major challenge for governments in the Republic of Ireland and in Northern Ireland and also for the Christian Churches,” the statement says.

“However, along with the challenge comes the opportunity for citizens and churches to respond with generosity and in faith. Following a meeting of the archbishops and bishops last week, by way of initial response the Church has now written to the Governments in both jurisdictions to express willingness to engage with plans to support refugees coming to Ireland, North and South.

“Many people in our churches wish to demonstrate locally God’s care and love to refugees and have indicated a willingness to offer practical help in the face of enormous human need,” the statement says.

“But they are also seeking practical guidance and direction as to how best they can make their contribution as part of a wider, coherent plan. We want to engage with government in order to discuss ideas and to discover how best the Church of Ireland, along with others, can help, drawing on our networks of voluntary activity and goodwill across the island.”

The statement concluded: “As stated in the call made by the Church of Ireland Bishops’ Appeal, we continue to urge people to pray, engage with political representatives, and give as they can in response to this crisis.”