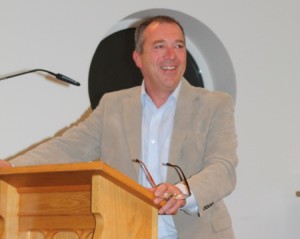 Former PSNI Chief Constable Sir Matt Baggott was the special guest speaker at the annual Synod of the Diocese of Connor held in Carrickfergus on September 23.

Returning to Northern Ireland for the first time since his retirement as Chief Constable, Sir Matt brought a message of encouragement to the diocese as he reflected on the topic of managing change.

A more in-depth report of Sir Matt’s address will be available in due course.

Around 300 members were welcomed by the Bishop of Connor, the Rt Rev Alan Abernethy, who in his Presidential Address highlighted the need for the Church to develop a considered response to the current refugee crisis in Europe, reflecting an earlier public statement by the Archbishops and Bishops of the Church of Ireland.

Later in the business session it was agreed, on the proposal of the Archdeacon of Dalriada, the Ven Stephen Forde, that the Diocese write to the Government, encouraging it to take is moral responsibility to refugees seriously.

Mrs Janet Maxwell, Church of Ireland Head of Synod Services and Communications, gave a presentation on the Dignity in Church Life Charter.

The Report of Diocesan Council was proposed by the Rev Paul Dundas, and seconded by Mr Alan Hibberd and was passed by Synod, as were Reports of other bodies and committees.

Three Notices of Motion proposed by Archdeacon Stephen Forde relating to an Amendment to Standing Orders, Representation on the General Synod and Amendments to Diocesan Regulation – Voting Procedures were also passed by Synod, and a Motion relating to the Diocesan General Fund, proposed by the Rev Dr Alan McCann was also passed.

A Motion on Climate Change – Disinvestment by RCB prompted some debate. The motion, proposed eloquently by the Rev Canon John Budd urged the RCB to

Canon Budd said: “We will soon be taking part in Harvest Services, thanking God and making us aware of our debt to him, but also of our responsibilities. We have to think about the consequences of our actions at home and elsewhere in the world.”

He said 80 per cent of global warming was due to CO2 emissions. “Those who are least prepared to face the consequences are the poorest who are among the least contributors to pollution.

“The best answer for the world’s future is for as much as possible of existing reserves of coal, oil and natural gas to remain in the ground and to move to natural fuels,” said Canon Budd.

The motion was seconded by Diocesan Lay Secretary Ken Gibson who said: “It is our responsibility to look after what God has given us.” Arthur McCartney, St John’s, Malone, and the Rev John Bach also spoke in favour of the motion.

Leonard Jarvis from Derriaghy was a dissenting voice, arguing that God had given us coal, oil and gas to use. “We need to question the science. Yes, we need to look at resources and renewables, but we are in danger of indulging in political posturing,” he said, urging Synod members to vote against the Motion.

The Motion was passed by a majority vote. 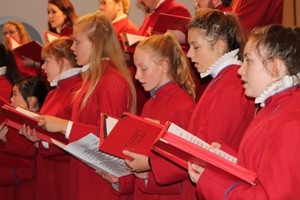 Kicking off a lively evening session, musicians from St Anne’s Cathedral, Belfast, gave a presentation on the Cathedral Choir Schools Project, a cross community initiative which offers singing classes to pupils from three north Belfast primary schools both in the classroom and at St Anne’s.

The presentation was introduced by Master of the Choristers, David Stevens, who highlighted developments in music at the Cathedral, which now has several choirs and holds seven sung services a week.

Head of Vocal Tuition at St Anne’s, Catherine Harper, heads up the Choir Schools Project. “The project brings children of different political views together to sing,” she said. “It is ground breaking, there is nothing else like it in Northern Ireland.” She outlined how the project boosts children’s self-esteem and crosses all barriers. “When children put their cassocks on they are completely equal,” she added.

Synod was shown a video of the Choir School Project in action, filmed inside and outside the schools, in the choir minibuses, and in the Cathedral. Members of the St Anne’s Choir (Girls and Seniors) then sang two beautiful pieces directed by the Master of the Choristers.

Synod members had been given brochures about the Choir School Project and thanking the Cathedral musicians for their presentation, the Archdeacon of Connor, the Ven Dr Stephen McBride, said the diocese commended the project to individuals and parishes.

“This amazing project is reaching out to so many children who are getting an opportunity to engage with music they would not have had otherwise,” he said.

Archdeacon McBride then introduced the latest members of team Connor, by way of a question and answer session with firstly Karen Webb and Stephen Whitten, the two Evangelists working in the north Belfast Centre of Mission, and then with new Youth Officer Christina Baillie, who took up her post just 10 days previously.

They each spoke of the challenges that lay ahead and their hopes for the future in north Belfast, and in youth ministry across the diocese. The work of the Engage Connor Youth Council was praised for creating a great momentum in youth work across the diocese.

Introducing the guest speaker, whose identity was kept secret until 6pm due to security considerations, Bishop Alan said it was a ‘joy and delight’ to welcome Sir Matt Baggott to Synod.

“We met several times when he was Chief Constable but one of the most moving things was after we had been sitting talking over difficult issues the Chief Constable turned and asked me to pray for him, and then he prayed for me. It was a very special moment in my ministry,” the Bishop said.

Sir Matt’s good humoured and very personal presentation was well received by Synod, and was followed by a questions and answer session before Synod was formally closed.