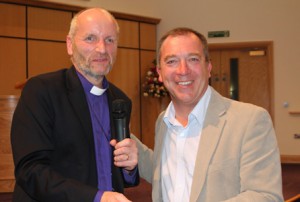 Sir Matt Baggott returned to Northern Ireland for the first time since his retirement as PSNI Chief Constable to talk to the Diocese of Connor Synod about managing change.

In a humorous and very personal address, Sir Matt drew parallels between Connor’s vision of Empowering Ministry, Effecting Change and Engaging Culture with his key policies during his five years with the PSNI – providing a ‘personal, professional and protective’ policing service for all.

Sir Matt, who served with the police for 37 years, said he and his family had been ‘truly blessed’ during their time in Northern Ireland.

He paid tribute to the choir of St Anne’s Cathedral, which had sung for Synod earlier in the evening. “Wouldn’t it be a blessing if one day one or two of those young people were in Stormont, having learned that once they put on a cassock they are no different from each other. They speak with harmony rather than conflict,” he said.

Sir Matt reflected on how things had changed in Northern Ireland in recent years. He recalled visiting a family home to apologise after a bomb destined for a local police station had instead landed in their garden.

“It was the home of an IRA family. They invited me in for tea and tray-bakes, and the lady of the house welcomed me saying ‘Things have moved on,’” he said. 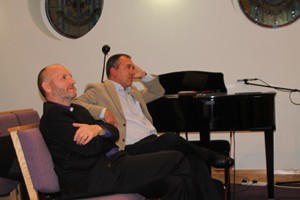 Before his talk, Sir Matt Baggott listened to a presentation by the St Anne’s Cathedral Choir, and interviews with new diocesan staff members.

On another occasion, when out for a quiet walk, he was recognised and invited to join a worship meeting nearby. “There were Nuns serving cake, people from across the world and from my work I hadn’t expected to see, and people with interesting tattoos. One said he had been in the UVF, another had been an IRA member. They told us they were going to pray for us every day.  It shows the power of simple gestures, such as eating, in bringing people together in greater understanding and friendship”. He encouraged that, although often problems can seem daunting and too big, not to be discouraged because it is often the simple acts that make a difference.

The former police chief urged Synod members to continue to remember serving officers. “Don’t stop praying for my colleagues. I saw some miraculous things in those five years. We are living in a time of grace, opportunities are being given for the gospel to be heard. Change is happening from the street and neighbourhood outwards,” he said.

“My colleagues here are undoubtedly the bravest people who I have worked with. There are colleagues who never told their children what they did. Please continue to pray for them, they are part of this story of change.’

Sir Matt said it hit him that he was in a position of authority when he received a letter at his home advising him that a fine would be issued for a speeding offence – signed by himself! “I didn’t know I did that, why weren’t the police out catching burglars and robbers!” he joked.

But he encouraged Christians to consider their God given authority to make a difference. “We have the power to transform lives, including our own, the power that comes from the Creator.” 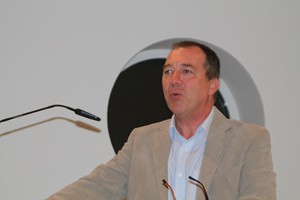 The Lord had called him to Northern Ireland. “I had no idea Northern Ireland was on the agenda, but I could not walk away because of the very clear ways he directed us. The Lord makes sure that we are in the place he wants us to be in if we are open”.

“When here, I travelled north, south, east and west and wherever I went I could see the Spirit was transforming lives profoundly. I want you to know that because it isn’t always obvious until you take a step back.”

Sir Matt said Connor’s Connections vision was really in tune with what he was doing during his time with the PSNI.

Being ‘professional’ in policing was about being accountable, he told Synod, knowing and understanding that who we are and our values are the most important things.

He recalled his first weeks in the job and some of the media comment.  “I thought they would be asking me about policing, but quite a lot was about how they perceived I should be or act!  It was quite bewildering! I was too small, I was English, I smiled too much, I drank in moderation, and I didn’t go to a sporting match on my first weekend here!”

He said some wanted him to conform to their own views and perceptions, but what was important was that he stuck to his true accountability to the law and what was required, and not that of style or others’ opinions.

He explained how the PSNI had gone through a journey of thoughtful discussion about how its identity should be based upon ‘who we are and what we do’, and not fixed on symbols or tradition.  “There had been a lot of pain involved in the move from the RUC to the PSNI. I had a lot of respect for the RUC. They were some of my heroes, immense people and friends of courage. But there was a time when the RUC had to stop being the RUC and become the PSNI, and what truly mattered was not the uniform but the difference we made.”

He expressed some sympathy for the Pharisees because, like them, he enjoyed the safety blanket of the familiar. But the Pharisees had overcomplicated their faith, forgotten what true accountability really was and had invented over 600 laws! He said he did think they got much excitement out of seeing what God was doing and had tried to constrain Him.

Referring to the ‘miraculous’ things happening in the Anglican Church in Baghdad under the Rev Andrew White, Sir Matt said that church should allow itself to feel helpless.

“As a human being there were times I felt helpless. Dealing with protests night after night with diminished resources, and being told we were too hard or too soft at the same time! But we came through that threat to the future without a single member of the public being seriously injured and justice being done. At times we all think, ‘I cannot do this.’ But we don’t have to alone. Whether it’s a street mission. Whatever the challenge or problem the Lord is there.

“One of the things I learned was the need to be less self-reliant and more honest with God. When I did so I knew His presence and assurance very strongly.”

Sir Matt likened a second strand of the vision strategy, Engaging Culture, to ‘personal policing’. “It became apparent to me that bureaucracy was stopping us developing relationships,” he said. “What people wanted was a solution. We spent too much time mired in bureaucracy rather than solving the problem.

“If you don’t have a relationship and trust with the people you serve, nothing happens. You get no information, no support. You cannot solve anything.” He added: “Likewise, our God is a God of relationships and we must clear away the things that hinder. He quoted from the end of John’s Gospel on how Jesus understood the frailties and human weakness of the disciples, was persistent in going to them and simply asked Peter ‘Do you love me?’ A relationship with God is not complicated and it is where our strength come from.

Finally, Sir Matt likened the dioceses Effecting Change strand of its vision with his protective   policy in the PSNI.

“Do not be afraid to take risks. Start small, even just by doing something on the street, you will be amazed at how powerful that can be,” he said.

Referring again to St Anne’s Choir and the Choir School Project which works with children in north Belfast, Sir Matt said: “What I saw tonight will shake the foundations of Belfast in time.”

He referred to the 1859 Revival. “I was amazed by how that started. It started with some people getting on their knees, leaving their differences aside and getting back to loving God and being honest and straightforward.

Following his talk, Sir Matt took part in lively Q & A session before being thanked by the Bishop of Connor for sharing his story, and his thoughts.

Sir Matt said afterwards: “It was great to join with the Synod and a real blessing to me personally.”