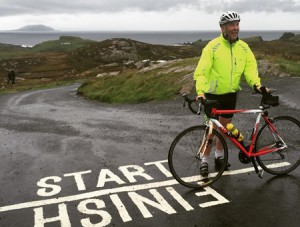 Derek cycled all the way from Mizen Head in Cork to Malin Head in Donegal, and his efforts have to date raised more than £4,000.

Agherton Parish Church in Portstewart is currently building an extension which will bring it into line with Disability Access legislation. 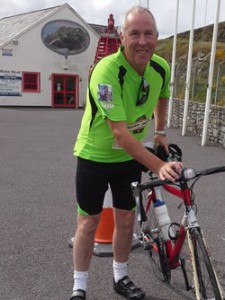 On Sunday September 13, Derek and his support team left the church car park encouraged by the good wishes of parishioners attending 9.30am communion service. They travelled to Cork in their motorhome (kindly provided by Causeway Campers) and after a day of relaxation and sightseeing commenced the serious business of cycling from Mizen Head to Malin Head.

They arrived relatively unscathed (albeit six minutes late!) at Malin Head on Sunday September 20 to a warm welcome from family and friends. Well done to Derek and the support team.

Anyone who would like to support Derek’s effort further can do so by sending a donation to Agherton Parish Office, 19 Church Street, Portstewart. BT55 7AH. Cheques should be made payable to ‘Agherton Anniversary Appeal.’