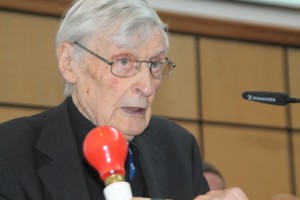 One of the Northern Ireland football team’s most senior and most dedicated fans was today planning his trip to France for the European Cup Finals next summer.

Canon Edgar Turner, who is 95-years-young, spent the morning recovering from the excitement of seeing his team beat Greece 3-1 at Windsor Park last night (October 8).

“Not only did I get along to the match, I was there cheering along with the rest of them,” said a jubilant Canon Turner, Senior Registrar for the Diocese of Connor.

He has attended all the home matches in Northern Ireland’s Euro 2016 campaign, and some of the away games, including the Faroe Islands where he was presented with a team shirt by members of the squad who know him well.

Canon Turner can’t get to Finland for this Sunday’s game, although his daughter Kate will be there flying the Turner flag, but he said plans are well underway for the trip to France. 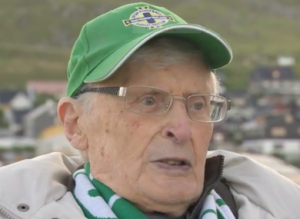 Canon Turner is passionate about the Northern Ireland football team.

“They have not decided who is playing who or where the games are to be played,” he explained. “It could be Paris, or Lyon or Bordeaux or any number of places, but we will station ourselves in Paris and should be able to travel to wherever Northern Ireland are playing.”

He described the victory over Greece as ‘superb,’ but admitted he was expecting it. “I had forecast it,” he said. “I am delighted. I know them so well and was pretty confident they would win.”

Canon Turner was a young thing in his mid 60s when Northern Ireland last qualified for the finals of a major tournament. His enthusiasm for the team has never waned.

“I think that good quality fans stay with their team when it has dull years, they encourage them and when you get a good manager like the one we have at the moment who creates an extremely good relationship with his team then you feel confidence in him and in them.”

Canon Turner, who turns 96 in March, is already excited about next year’s French trip. He is travelling with his daughter Kate, son Justin and other family and friends.

“I am very much looking forward to it. I am digging out some of my old French dictionaries so I can brush up on the language,” Canon Turner said!