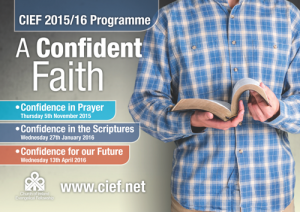 CIEF (the Church of Ireland Evangelical Fellowship) has launched its programme for 2015/6.

Details are as follows:

Brother David Jardine is a Church of Ireland clergyman and also a member of the Society of St. Francis, a religious community in the Anglican Church. He is a former chaplain in Crumlin Road Prison, Belfast.

Along with a group of others David Jardine founded Interdenominational Divine Healing Ministries in 1992. Since then, on an interdenominational basis they have been praying for the healing of individuals and of our land.

Brother David has led the formation of an extensive team of trained healers, who by invitation have attended many churches and associated venues throughout Ireland. Brother David is also a Canon of St Anne’s Cathedral, Belfast.

Confidence in the Scriptures

David Huss is rector of Donegal, Killymard, Lough Eske and Laghey and is also Archdeacon of Raphoe, where he was installed in November 2013. David has degrees from Oxford University in physics and theology and prior to Ordination taught for five years. His wife Beverly is a GP in Donegal and they have three young boys.

At the time of his appointment Bishop Good said of his new Archdeacon, “He is a deeply committed pastor in his parishes. As a diocesan team we are looking forward to the contribution he is going to make in fulfilling our purpose, Transforming Community Radiating Christ”.

Confidence for our Future

The Rt Rev Ken Good is the Bishop of Derry and Raphoe. After completing his third level education at Trinity College, Dublin he was ordained in 1977. He began his career as a Curate in Belfast after which he was Chaplain and Head of Religious Education at Ashton School, Cork.

Bishop Ken is married to Mary and they have a family of three who live in various parts of the UK.

In 1984 he became Rector of Dunganstown, Diocese of Glendalough; and in 1990 of Shankill Parish Lurgan in Dromore Diocese. His final appointment before elevation to the Episcopate was as Archdeacon of Dromore. Bishop Ken was elected Bishop of Derry and Raphoe in 2002.

For further information on the CIEF programme, please contact the Rev Malcolm Kingston on 028 3752 2970.