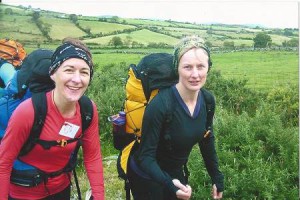 Sarah Gamble (left) and Gail Henderson strid out during the Mourne Mountain Marathon.

Gail Henderson, a physiotherapist who belongs to the parish of Gleno with Larne, and Sarah Gamble, also a physiotherapist and a parishioner of Broughshane, put their best feet forward in this marathon which takes place over two days and requires all competitors to take part in pairs. Sarah’s husband Richard Gamble, Broughshane Parish, and his brother David, also paired up for the challenge.

Richard and David are regulars in this type of race, but it was something of a first for Gail and Sarah.

“I have done a bit of orienteering, but nothing like this before,” said Gail. “The first day we were walking for five and a half hours, and I would normally be out for around 45 minutes!”

While Richard and David were in the more elite category, Gail and Sarah competed in the beginners’ group. “You are given a certain point and it is up to you to decide how to get to that point,” said Gail. “We all started at different points, but everyone camps out overnight at the same place.” 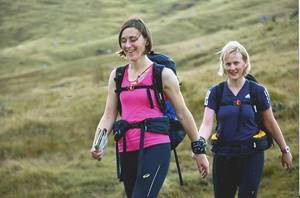 Sarah and Gail in the wilds of the Mournes during the two-day mountain marathon.

Competitors have to carry their tents, food and all supplies on their back.

“It was different, but very challenging. We felt really good because we had not expected to do so well,” said Gail

They were raising funds for the Barnabas Trust’s ’Operation Safe Haven, which aims to safely transport Syrian refugees to Poland. Their target is £2,000, which would cover the cost of transport and setting up a home in Poland for one refugee.

Gail said it was a sermon in church about the plight of refugees which encouraged her and Sarah to do something for the charity. Sarah, whose father is the Rev John McCammon, was aware of the work of the Barnabas Trust.

“We really wanted to give money to support the Syrian refugees and this project will help the Barnabas Trust transport refugees through Lebanon into Poland,” explained Sarah. “Two thousand pounds will transport one person to Poland and cover their keep there for a year.”

She said the mountain marathon had been good fun. “I didn’t do a lot of training but I do have a good level of fitness. I really enjoyed it,” Sarah added.

To learn more, or to support Gail and Sarah’s fundraising effort for the Syrian refugees, please visit: https://my.give.net/BarnabusfundOSHGSDRMMM