100 children join in the fun at Kids Big Adventure Ballymoney 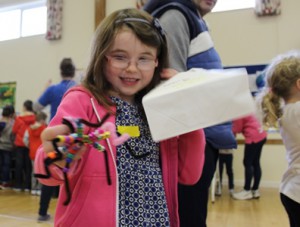 “Thanks to all the leaders who gave up their Saturday to bring their groups along, you really made the day special for everyone,” Jill said.

The theme of Kids Big Adventure this year was God’s Big Garden, telling the story of the creation, fall and God’s rescue plan in sending Jesus to take the punishment and bring people back to God.

The afternoon began with a spider craft activity, followed by an on stage presentation which included silly warm up songs, drama, praise songs, puppets and a short video – all telling the story of how God created the world and how humans chose to turn their own way and disobey God. 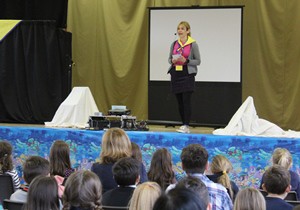 St Patrick’s Ballymoney, is renowned for its hospitality and home-made cakes and buns so the leader’s café was a very popular spot and provided a chance for leaders to spend time together.

The workshops were followed by more praise songs, a prayer activity and a great interactive talk by Andrew Neill who needed to learn a lesson or two in growing seeds! (He fed them coke and KitKats and the kids had to put him straight!).

The theme in this section was God’s rescue plan in sending Jesus, and the children learned to sign along to a song called “Walk with You” – Jill expressed thanks to Aimee Gibson and Amy Webb for teaching the children the signs based on British Sign language.