Launch of book of ancient sermons discovered in Belfast Cathedral 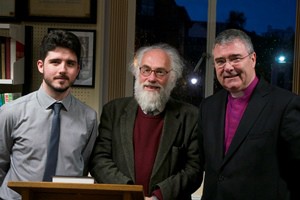 Book editors Roibeard Ó Gallachóir and Raymond Gillespie with Bishop John McDowell at the launch of the sermons of James Saurin.

The life, and thinking, of an 18th century Belfast cleric was in the spotlight when a book of sermons by James Saurin was launched in St Anne’s Cathedral.

Saurin, a descendant of a prominent Huguenot family, was appointed as vicar of Belfast in 1747. One of his first acts was to write a series of sermons that he preached to his congregation over his long tenure as vicar.

Some 55 of these sermons were recently discovered in St Anne’s , having been preserved and used by Saurin’s son and grandson for their preaching.

The sermons were collated and edited by Raymond Gillespie and Roibeard Ó Gallachóir, and have been published by Four Courts Press in association with the Cathedral and the Representative Church Body.

Preaching in Belfast, 1747–54 A selection of the sermons of James Saurin was launched in the Library of St Anne’s after Evensong on Tuesday October 20. The event attracted around 20 people interested in learning more about Saurin and the contents of this historic publication. 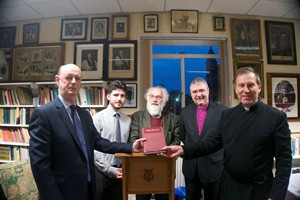 At the launch, The Rt Rev John McDowell, Bishop of Clogher, gave a knowledgable and very interesting talk about James Saurin and 18th century Belfast, He spoke about the importance of the writer of these sermons and his stance over issues of church and community.

Co-editor, Raymond Gillespie, from the Department of History, Maynooth University, continued the theme, describing how the book came about and thanking Four Courts Press and those who had supported the publication financially.

Also present was Roibeard Ó Gallachóir, whose transcription of the manuscript of sermons was key to the project. Roibeard is a recent graduate of the MA in Historical Archives, Maynooth University.

Preaching in Belfast, 1747–54 A selection of the sermons of James Saurin includes 20 of the 55 sermons and reflects on a wide range questions.  They include:

This unique collection of sermons provides a vivid insight into the mind of a Church of Ireland clergyman in a rapidly changing provincial town at the middle of the 18th century and illuminates many of the key issues of the world of provincial Ireland.

To learn more about this book, visit the Four Courts Press website.