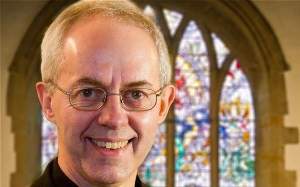 The Archbishop of Canterbury, Justin Welby, will speak at the Corrymeela anniversary service. All are welcome to join the celebration in St Anne’s Cathedral at 3.30pm on November 1.

The Archbishop of Canterbury, the Most Rev Justin Welby, will celebrate 50 years of the Corrymeela Community at a service in St Anne’s Cathedral, Belfast, on November 1.

The Head of the Worldwide Anglican Communion will be joined by other church leaders, including the Roman Catholic Primate Archbishop Eamon Martin.

Corrymeela was founded in 1965 by Ray Davey, a former chaplain in World War II, and a group of students from Queen’s University. During the war, Ray was a prisoner of war in Dresden and witnessed the bombing of the city.  This experience profoundly changed him.

He returned to work as a chaplain in Belfast and became concerned at the tensions brewing between people of different political, religious and ideological differences in Northern Ireland. Corrymeela grew out of this concern.

He and the Queen’s students raised £7,000 in just 10 days to buy a property outside Ballycastle. The site officially opened on October 30 1965. The area was already known as Corrymeela – one of a number of interpretations of this is ‘Hill of Harmony.’

From its first days, Corrymeela has been a place of gathering, work, faith and discussion, bringing people of different backgrounds, different political and religious beliefs and different identities together.

Today it continues to promote tolerance.  It offers space for an analysis of the underlying dynamics of conflict, fracture, scapegoating and violence affecting so many spheres of the world today.

Corrymeela works with more than 10,000 people a year at its residential centre in Ballycastle and in schools and communities throughout Northern Ireland. It also has a dispersed community of more than 150 members who commit to living out Corrymeela’s principles of reconciliation in their own communities.

The service in St Anne’s, which gets underway at 3.30pm, is the culmination of Corrymeela’s anniversary celebrations. The service will have a theme of gratitude and thanksgiving for all that has been achieved over the last 50 years.

Pádraig Ó Tuama will lead the service, with contributions from Archbishop Martin and the Archbishop of Canterbury.

John Bell from the Iona Community has written a special liturgy for the service and beautiful music will be provided by the St Anne’s Cathedral Choir and Voices Together.

This is a public service and all are welcome to join the Corrymeela Community to celebrate 50 years of peacemaking.