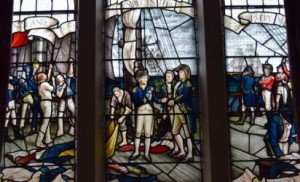 The unique memorial window in the Allen and Adair Hall depicts both Lord Nelson and Captain Adair at the Battle of Trafalgar.

Trafalgar Day had a special significance in the Parish of Derrykeighan, whose parish hall is the only one in Ireland with a memorial to Lord Nelson – and to local battle hero Captain Charles Adair.

The British victory at the Battle of Trafalgar in 1805 is immortalised in history, but little is said about those who died alongside Nelson.

Captain Charles Adair led the contingent of Royal Marines on HMS Victory. He has been described as acting with great gallantry encouraging his men to fight off those trying to board from the French ship Redoubtable.

Adair’s sacrifice is remembered in Dervock, where the Allen and Adair memorial hall bears his name.  Built in 1936, it features a stained glass window depicting Nelson and Adair on the HMS Victory shortly before their deaths.

Adair was not directly linked to Dervock, but his family would later be joined by marriage to the Allen family who made their fortune in the linen industry and bought a large estate near the County Antrim village.

The Allens were proud of their ancestor who fought and died at Trafalgar and so one of the last of the Allen line gifted a hall to the local parish church on the proviso that its interior would tell the story of the Allen and Adair families.

On October 21, Derrykeighan Parish hosted a Trafalgar Day Concert in the Allen and Adair Hall, and BBC journalist David Maxwell came along. You can read David’s full report on the BBC website.

The concert was organised by Peter Thompson, and included music and verse featuring instruments that would have been familiar in 1805. Peter is determined Dervock’s Trafalgar hero will not be forgotten.

As well as raising awareness of the stained glass window, the concert raised funds for the Allen and Adair Memorial Hall.

An article on the Dervock window also appeared in a feature by Roamer in the News Letter on October 21.