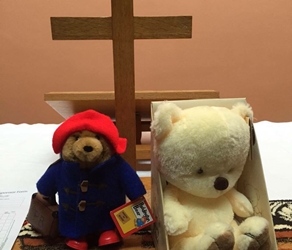 Bears, includiing Paddington himself, all set for the journey to a new life with a refugee child.

Young parishioners at the Church of the Good Shepherd, Monkstown, are sending great bear hugs to refugee children fleeing to Europe by supporting Project Paddington.

In response to the Parish Harvest Appeal, children, parents and grandparents prepared their much loved teddies for a trip to a new life – just like Paddington Bear!

Dozens of teddies have now been parcelled up and will be forwarded to children who had to leave everything behind when they fled their homeland. Families from Newtownabbey Methodist Mission have also donated teddies to the appeal.

Project Paddington was set up by Joy French, a friend of the Rev Arlene Moore, Priest-in-Charge of the Church of the Good Shepherd, and a trainee vicar in Sheffield.

Joy, her three children, and a number of other mums from the parish parent and toddler group started the project early in September after seeing the shocking images of three-year-old Aylan Kurdi whose tiny body was washed up on a Turkish beach. 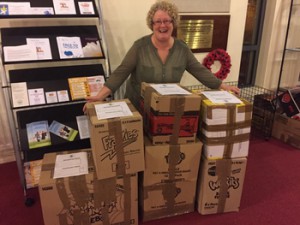 Mrs Kathleen Lunn, Hon Churchwarden, Church of the Good Shepherd, Monkstown, with some of the teddies ready to be transported to their new owners.

Joy said she thought her Facebook initiative would be a small-scale venture in Sheffield, but in less than a week 4,000 people had joined the group, scores of schools  got involved, 30 regional co-ordinators volunteered to collect the teddies across the UK, and people had pledged support from as far away as the US, Dubai, and New Zealand.

The idea was for children to give teddies with welcome messages attached to those who had fled the war in Syria, and youngsters posted pictures of their donations and messages on the Project Paddington Facebook page.

The project is now collecting money from people who are sponsoring the bears and has launched a ‘bear selfie’ campaign.

“The way that people have come together around this has just been unbelievable,” said Joy. “We could never have known how this would have taken off. So we’re just humbled and shocked. The response has just been incredible.”

The project has become so big Joy has partnered with Tear Fund, and Arlene and the Church of the Good Shepherd became Regional Coordinators for Northern Ireland groups.

Arlene said: “I knew William Carson from Methodist Container Ministries in Lurgan as he had shipped literally tonnes of aid for me to Africa when I was a curate in St Mark’s, Portadown. William agreed to help with the shipping of the teddies and to lend his expertise to Project Paddington. 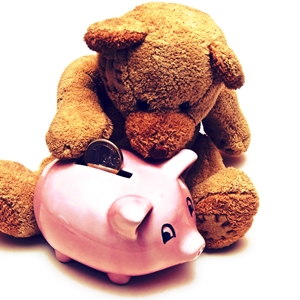 “We sent our teddies out to join the consignment of some 30,000+ going from UK and our financial donations went to their partner Tear Fund to buy whatever supplies were needed on the ground including tents, clothes, water, food, medicines.”

Among the parishioners who worked tirelessly to get the teddies ready for their journey were Mrs Kathleen Lunn, Honorary Churchwarden, Mrs Liz Feely, Honorary Steward, and Ms Laura Harris who helped laminate tags for all the teddies and sort them out. Mr Len Officer, a local preacher, delivered them to the warehouse of the Methodist Container Ministry in Lurgan

Project Paddington has now closed for new teddy bear registrations. However, schools and groups throughout the UK are raising funds for refugees through teddy bears’ picnics, onesie days, cake sales and other fundraisers. Project Paddington can support groups or schools with information about refugees and certificates

And anyone can share the bear love for refugee children and their families by posting a  #teddyselfie. Visit the Project Paddington website or Join ‘Project Paddington’ on Facebook to find out more.