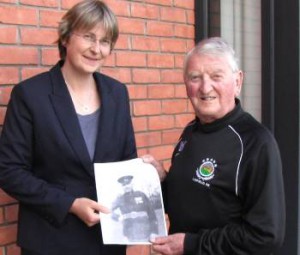 A Belfast man whose grandfather’s letters from the Western Front during World War One are now housed in the RCB Library in Dublin has met historians researching the wartime letters.

Kenny McKeague, a trainer and member of the backroom staff with the first team at Linfield Football Club, is the grandson of William James Millikin.

A collection of letters written by William and nine other soldiers who were all parishioners of the Parish of Dundela in East Belfast was the subject of an online exhibition and short film put together by the RCB Library following the discovery of the letters, which tell a very human story.

While various letters written from the front are found in other repositories and in private custody, the survival of a collection in a parish context is rare.

Subsequent collaboration between the Library (where the letters are now in permanent safekeeping) and local historians from the East Belfast & the Great War Project has confirmed these are the only such letters known to survive relating to soldiers from East Belfast.

Now, thanks to the ongoing research work of the team and in particular the painstaking efforts of historian and genealogist Dr Hilary Kennedy, the stories of what happened to each of the 10 letter writers (all of whom returned to Belfast at the end of the War) have been tracked, and in a few cases living descendants have been traced.

Kenny McKeague is one of those contacted by the team.  Now in his 80s, Kenny continues to live in Belfast and like his grandfather is a parishioner at Dundela. William’s poignant letter, written in France on February 12 1918, specifically thanked his rector, the Rev Arthur Barton, for the pastoral care he was giving his family at home.

William’s concern for his wife and young children was clearly assuaged by the knowledge that Barton as rector paid them regular visits, so as well as thanking Barton and the parishioners of St Mark’s for their gifts, he specifically acknowledged the rector ‘for your own kindness to my wife and children as the letter I get from home from my wife says that you are very attentive …’

The content of the letter, an image of William in full military uniform and his meticulously-researched family history which links him directly to his grandson Kenny (compiled by Dr Hillary Kennedy) will be available on the new online presentation available at this link – www.ireland.anglican.org/library/archive – from November 1 2015.