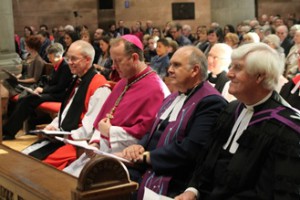 At the Service of Thanksgiving for Corrymeela in St Anne’s are, from left: The Archbishop of Canterbury, the Most Rev Justin Welby, Roman Catholic Primate of All Ireland Archbishop Eamon Martin, Methodist President the Rev Brian Anderson and Former Presbyterian Moderator the Very Rev Dr Ken Newell.

The Archbishop of Canterbury, the Most Rev Justin Welby, celebrated 50 years of the Corrymeela Community at a service in St Anne’s Cathedral, Belfast, on November 1.

The Head of the Worldwide Anglican Communion joined other church leaders, including the Roman Catholic Primate of All Ireland Archbishop Eamon Martin, Former Presbyterian Moderator the Very Rev Dr Ken Newell, Methodist President the Rev Brian Anderson and President of the Irish Council of Churches the Rev Dr Donald Watts for this service of thanksgiving.

It was led by Corrymeela Community Leader Pádraig Ó Tuama and featured an extended liturgy written by John Bell from the Iona Community as well as music from both Voices Together and St Anne’s Cathedral Choir. The Dean of Belfast, the Very Rev John Mann, played the violin.

Corrymeela was founded in 1965 by Ray Davey and a group of students from Queen’s University. During WW2, Ray was a prisoner of war in Dresden and witnessed the bombing of the city.  He returned to work as a chaplain in Belfast and became concerned at the tensions brewing between people of different political, religious and ideological differences in Northern Ireland. Corrymeela, with its centre of reconciliation in Ballycastle, grew out of this concern. 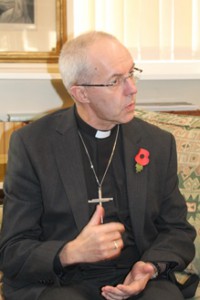 Archbishop Welby speaks to the media in the Cathedral Library before the Corrymeela Thanksgiving Service.

The congregation was greeted by the Dean of Belfast and special guests were welcomed by The Dean of Armagh, the Very Rev Gregory Dunstan, speaking on behalf of the Archbishop of Armagh, the Most Rev Dr Richard Clarke.

In his sermon, Archbishop Welby told a packed Cathedral: “Fifty years ago the vision and passion of Ray Davey caught the imagination of a group of young volunteers. Born out of the scars of his wartime experience in Dresden it brought into being a community of faith that has held with great courage and hope the stories, trauma and legacy of 40 years of conflict in these islands.”

The Archbishop preached on the story of the Woman at the Well and the ‘concepts it opened up of being a place of welcome or a person of welcome.’

He spoke of Burundi in Africa where a civil war ended 10 years ago, but there has been very limited reconciliation. Since this year’s disputed election process, many of the tensions in Burundi have re-emerged.

“There is perhaps something of this dynamic in the on-going challenges you face here in Northern Ireland,” the Archbishop said. “The moment there is new pressure or new suspicions, the gaps re-emerge. Let us hold onto this: Jesus does not permit these gaps. The welcome of reconciliation is a welcome that draws together antitheses, opposites, even materials that when combined are in danger of being explosive. They are deliberately, consciously and expressly brought together by Jesus.” 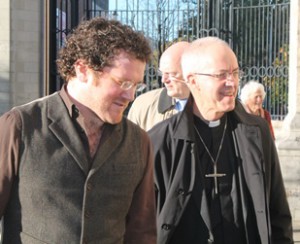 He added: “The welcome of reconciliation is not a soft or an easy option… It is the hard choice which is a necessary part of moving beyond the politics of a peace process.”

The Archbishop encouraged Corrymeela to continue its work: “Let the welcome of reconciliation, with all its discomfort, hold you to the path of the Cross,” he said.

You can download the full text of Archbishop Welby’s sermon here.

Opening the service, Corrymeela Community Leader Pádraig Ó Tuama said:  “Corrymeela believes in the power of people telling their stories, of shared hospitality, of telling the truth about the present, of turning towards each other and finding strength, life and hope in each other. Ultimately, the work of Corrymeela helps groups learn how to be well together.”

Roman Catholic Primate Archbishop Eamon Martin led the gathered congregation through the opening liturgy using the three symbols that have guided the Corrymeela community in their first fifty years: an open Bible, a lit candle, and a turf cross. 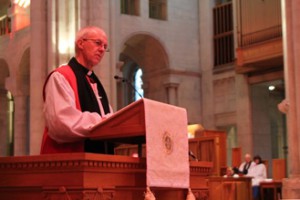 The Archbishop of Canterbury preaches in St Anne’s Cathedral during the Service of Thanksgiving for Corrymeela.

Methodist President Rev Brian Anderson referred to the differences in the Lord’s Prayer or Our Father between denominations saying: “The heart of the pray is always the same – to bring God’s people to the place of peace and supplication. Today with all our differences, both serious and slight let us join our hearts in this prayer.”

Former Presbyterian Moderator Very Rev Dr Ken Newell said the founder of the Corrymeela Community Ray Davey described the Christian message of peace as ‘much more than a permanent ceasefire.’ What was necessary was an understanding of ‘the total health and wellbeing of our society, especially the recognition of the dignity and worth of every person.’

The Archbishop’s arrival in Belfast on Sunday was delayed by fog at Heathrow Airport, but he took time before the service to do television, radio and press interviews in the Cathedral Library.

The Archbishop was interviewed on a range of subjects including the political situation at Stormont, welfare reform, the refugee crisis, and his own journey of faith.