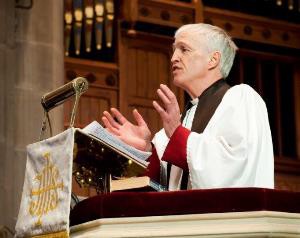 The Rev Canon Stuart Lloyd preaches during his last service as rector of Ballymena before his retirement. Photo: Helen Weir.

St Patrick’s Parish Church, Ballymena, was packed on Sunday November 1 for the Rev Canon Stuart Lloyd’s final service as rector before his retirement.

It was in January 1989 that Stuart arrived in Ballymena for his institution as the rector of the Parish of Kilconriola and Ballyclug, conducted by the then Bishop of Connor, the Rt Rev Samuel Poyntz.

Stuart’s wife Jane and three daughters, Lucy, Sophie and Sarah, settled into parish life very quickly too. Life in Ballymena began with the girls starting school and the rector getting out and about meeting his parishioners. Jane also took on various roles within the parish and it wasn’t long before the family was well known to all the parishioners. 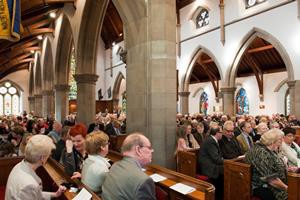 The Canon soon became known ‘as the wee man on the bike’ for it was by bike he would ride around the town visiting his flock.  Around the parish he was known as a workaholic for no matter what the task he was the first to lend a hand.

He enjoyed his walks up Slemish and before going on one of his trips to Nepal he climbed Slemish 50 times raising money to take with him.  His sermons were always well thought out and visiting the sick and elderly took up a lot of his time along with all the committee posts he held.  As everyone who attended a funeral knows his eulogy was sensitive and always from the heart. 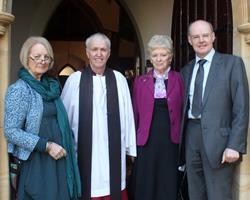 Baroness Nuala O’Loan and her husband Councillor Declan O’Loan were among the guests at the service. They are pictured with Canon Stuart Lloyd and his wife Jane. Photo: Loraine Watt.

So, it was no surprise that Sunday saw the huge turnout for his last service of Morning Prayer with the choir and the music group leading the people singing.   Following the service almost all the congregation walked over to the hall for a light lunch and the presentation of gifts and a bit of fun at the rector’s expense.

Our rector liked to take part in a sketch for the Harvest Supper each year, so naturally this one had to be about Ted and Dougal.  As always the catering team worked wonders with the catering.

The following morning he was as usual spotted on the bike waving and saying hello to the people of Ballymena, not as rector but as Stuart.

The congregation moved into the parish hall for lunch and a presentation of gifts to the Rev Canon Stuart Lloyd to mark his retirement on November 1. Photo: Helen Weir.

We all wish him a very happy and long retirement to enjoy his time with the grandchildren and Jane – he may have stepped down from pressures of Ballymena but no doubt there will be a pulpit or two where he’ll ascend on a Sunday in future.