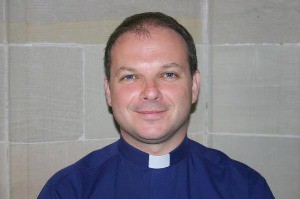 The Rev Kevin Graham, rector of St Bartholomew’s, Stranmillis, has been appointed an honorary chaplain to the Lord Mayor of Belfast, Councillor Arder Carson.

In the role, Kevin is part of an interfaith chaplaincy team reflecting the multi-cultural nature of Belfast in the 21st century.

On Armistice Day several members of the chaplaincy team accompanied the Lord Mayor and Deputy Lord Mayor for the service at 11am to mark with a two minute silence the anniversary of the end of WW1 at the war memorial at Belfast City Hall.

Kevin said:  “It’s a great honour and privilege to serve the Lord Mayor and all the people of Belfast as part of the multifaith chaplaincy team. It’s encouraging that faith is not excluded from our civic life but is afforded an opportunity to affect that civic life. I look forward to all that I may experience in this time.”