‘Uplifting and challenging’ clergy conference comes to a close 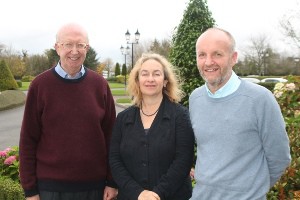 Connor clergy conference 2015 closed on Friday lunchtime with the Dean of Connor, the Very Rev John Bond, describing it as the ‘most uplifting, most challenging and most wonderful, amazing conference I have been privileged to attend.’

Dean Bond was extending thanks to the Rt Rev John Pritchard, former Bishop of Oxford (he retired in October 2014) who was one of two guest speakers.

The Dean of Belfast, the Very Rev John Mann, stepped up to thank the other guest speaker, Dr Jane Williams, Assistant Dean and Tutor in Theology at St Mellitus College and wife of the former Archbishop of Canterbury, Dr Rowan Williams.

This was the third Connor clergy conference organised by the Bishop of Connor, the Rt Rev Alan Abernethy, to take place in the Slieve Russell Hotel in Co Cavan – previous conferences were held in 2009 and 2012.

It ran from November 11-13 and was attended by 94 delegates including clergy and Connor staff.

The Dean of Connor led the Opening Eucharist, assisted by the Rev Peter Munce. Worship each day was accompanied by the wonderful music group led by the Rev Julie Bell, curate at Christ Church Parish, Lisburn, with the Rev Jonny Campbell-Smyth, curate at St Patrick’s, Jordanstown, and Dean Mann as well as a number of talented singers from among the delegates.

Over the three days, Dr Williams led a series of Bible Studies, her thoughts and her gentle voice captivating her audience.

Bishop John, also gently spoken, led a series of sessions on ‘the joy and struggle of vocation and discipleship,’ his words providing both challenge and refreshment.

Over the three days the clergy enjoyed the comforts of this lovely hotel with its excellent food. Some availed of the spa facilities, others braved the wind to walk in the hotel’s gorgeous grounds. There was time built into the schedule for relaxation, an opportunity for clergy to enjoy fellowship together away from their parishes.

On the second night, members of the diocesan development team gave an update on their work. They were introduced by Diocesan Development Officer Trevor Douglas and the conference heard from Youth Officer Christina Baillie, who has been in post for two months, Church Army Evangelists Karen Webb and Stephen Whitten who spoke about the North Belfast Centre of Mission, Communications Officer Karen Bushby, and Children’s Project Development Officer Jill Hamilton.

An unexpected guest appeared in the form of ‘Grandad’ who, with a little help from Karen Webb, gave a musical rendition of ‘New York, New York’ in a hands-on (or should that be a hands-in?) demonstration of the value of puppet ministry.

And there was laughter too when Jill showed a clip featuring Mrs Slocombe, Captain Peacock and Mr Humphries (for those old enough to remember ‘Are You Being Served’) – a lesson in how not to conduct a training session.

The second evening finished with an atmospheric Taize service, candles burning in the centre of the floor and repeated chants bringing a very positive day to a close.

At the end of the conference, Bishop Alan thanked everyone who had made it possible, including the diocesan team, the musicians, the speakers and in particular his secretary Rosemary Patterson.

Thanking Bishop John, Dean Bond, who retires in January, said he had been to many cleric conferences over the years. The two speakers had made this particular conference the ‘most amazing’ he had ever attended.

“John has spoken from the heart to the hearts of all of us,” Dean Bond said. “I have learned so much and have been helped and blessed in so many ways. Even after 48 years of ministry I have been refreshed and renewed.”

Dean Mann thanked Dr Williams for all she had given the conference. “You have asked us to think about a lot. You have said things which will live with us,” he told her.

Please visit our conference gallery below.