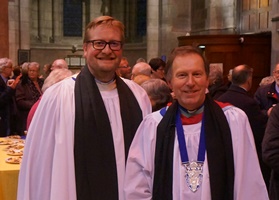 The Rev Canon Michael Parker (left) was installed a Canon by the Dean of Belfast, the Very Rev John Mann.

The Rev Michael Parker, rector of Carnalea, Diocese of Down and Dromore, was installed as a Canon of St Anne’s Cathedral, Belfast, on Sunday November 15.

Canon Parker was installed by the Dean of Belfast, the Very Rev John Mann. Cathedral registrar, Mr Michael Robinson, was present to read the mandate, and the new Canon was presented by fellow Canon Ronnie Nesbitt.

There was a congregation of around 160 for this afternoon service.  The Cathedral choir changed the anthem as a gesture of respect in the wake of the suffering and death in Paris on the previous Friday night to a part of Faure’s Requiem, singing the beautiful, quiet and poignant Agnes Dei.

The Bishop of Down and Dromore, the Rt Rev Harold Miller, was present to witness one of his clergy becoming a Canon and the Bishop gave the blessing at the end.  Family, friends and parishioners enjoyed tea after the service.

Canon Parker was ordained deacon in 1996 and following a four year curacy in St Mark’s Dundela, became incumbent of St Gall’s, Carnalea, where he has ministered for 15 years. He is also a member of the Board of Christian Aid Ireland and, speaking before his installation, said he was looking forward to the ‘privilege’ of joining Black Santa on the steps of St Anne’s.