Service in St Anne’s on eve of climate change talks 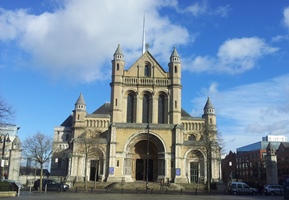 St Anne’s Cathedral will host an ecumenical service for climate justice starting at 1.15pm on November 29.

An ecumenical service of prayer and reflection for climate justice will be held at St Anne’s Cathedral, Belfast, on Sunday November 29 – the eve of UN climate change talks in Paris.

The service, which begins at 1.15pm, is organised by Christian Aid and Trócaire in partnership with St Anne’s.

It will be followed by a rally starting at 2pm in Writer’s Square. These events are part of a day of action being staged by climate activists in cities around the world including Dublin, Cork, London, Edinburgh, New York, Paris, New Delhi, Sao Paulo and Rome.

The United Nations climate change talks get underway in Paris on November 30. Christian Aid describes these talks as a crucial step towards the goal of limiting global temperature rise to two degrees Celsius.

Representatives of various churches will take part in the service including the Dean of Belfast the Very Rev John Mann; Church of Ireland Bishop of Down and Dromore the Rt Rev Harold Miller; Father Colin Grant from the Roman Catholic Church; the Rev Richard Kerr, Presbyterian Church and the Rev Brian Anderson of the Methodist Church. Representatives of the Lutheran Church along with Dr Clare Amos, World Council of Churches, who is visiting from Geneva, have also been invited.

Preacher is the Rev Canon Michael Parker. Music will be provided by Cathedral organist Ian Barber and a choir made up of singers from Christian Aid and Trócaire.

David Thomas, Christian Aid’s Education and Campaigns Coordinator, said: “We wanted to gather on the eve of important international climate talks in Paris to pray for those most affected by climate change and for the leaders who will attend the talks.

Christian Aid is organising the service along with Trócaire.

“Climate change is already affecting many of the poorest and most vulnerable communities in the world and so as Christians who want to be good news to the poor, we are united in our concern and our desire to see action.”

Kevin Donnelly, Regional Manager of Trócaire Northern Ireland, said: “Trócaire is calling for the introduction of ambitious climate change legislation in the lifetime of the current Assembly. Whilst world leaders aim to negotiate a legally binding climate agreement in Paris to reduce global emissions, Northern Ireland falls behind in playing its part in tackling the global climate crisis. Northern Ireland has per. capita CO2 emissions that are more than 80 times higher than Malawi or Ethiopia. We must do more to play our part in tackling the problem and ensure our politicians step up to the mark.”

Dean John Mann said: “The eve of the climate change conference in Paris provides the opportunity for the churches, like every other organisation and individual concerned for the future of our planet, to reflect on the harm humanity has been inflicting and continues to inflict upon it.

“As Christians, we envisage the earth not just as our world, but more importantly as God’s creation, and so this adds a further layer of meaning for the follower of Christ to consider.  In other words, it is not just self-interest and matters of justice and survival, but of the contemplation of how we relate to the natural world as stewards of the earth of which we are a part.”

The rally after the service will feature music from Beyond Skin and speakers from a range different interest groups and backgrounds, including birdwatchers, surfers and beekeepers, who all have a reason to be concerned about the impact of climate change.

Trócaire and Christian Aid are organising the service and will be involved in the rally afterwards.

Northern Ireland’s environment minster Mark H Durkan MLA, who will be attending the UN talks in Paris, and has been invited to join the rally to hear and to respond to the demands for action on climate change.