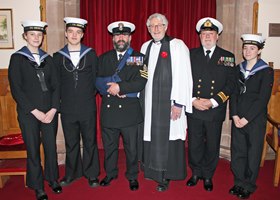 A stunning piece of wall art commemorating the sinking of the HMS Hawke in World War One was laid up in St Simon’s Church, Donegall Road, at a service on Sunday November 29.

The artwork, a net decorated with 524 handmade satin poppies, has been displayed on a gable wall at Barrington Gardens since it was unveiled on Remembrance Sunday.

Five sailors from the Donegall Road area went down with the Hawke. Of the 524 souls on board, 49 were from Northern Ireland.

The wreck of HMS Hawke lies 400 feet below the North Sea, 190 miles east of Aberdeen. The Hawke was struck by a torpedo and sunk in eight minutes. A Royal Navy training ship, 75 16-year-old sailors were among the dead.

The commemorative artwork, supported by the Northern Ireland Housing Executive through the Greater Village Regeneration Trust (GVRT), was hand sewn by members of the local community, including parishioners of St Simon’s and St Philip’s. 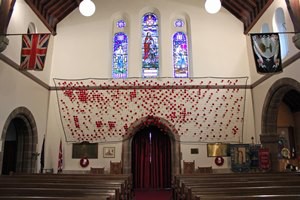 The poppy net is now on display in St Simon’s, Donegall Road.

It uses a net and rope framework, created by local Sea Cadets, and 524 satin poppies – one for each victim of the sinking – which together form a unique memorial to the lost seamen.

The project’s designer Pete Bleakley, said: “The Donegall Road was one of WW1’s biggest suppliers of fighting men and the loss of HMS Hawke hit the Donegall Road and Greater Belfast hard. It is fitting that, just over a century later, they now have a memorial dedicated to their honour, service and sacrifice.”

Jennifer Hawthorne, Housing Executive Head of Cohesion, said: “This project has seen the local community take ownership of a gable wall which previously was a site of racist and sectarian graffiti.

“This unique artwork has achieved the groups’ aims of creating a poignant reminder of local people’s sacrifice during WW1. I commend the local community’s enthusiasm and wholehearted backing for this initiative.”

Angela Johnston, GVRT, said: “We wanted to do something which reflected this area’s great love for the Remembrance poppy and all that it stands for. Creating the ‘poppy wall’ gave members of the local community – many of whom have relatives with a service connection – a real hands-on involvement in the project.”

The Rev Raymond Moore, Priest-in-Charge of St Simon’s, said the artwork will be ‘laid up’ in the church permanently, but will be taken down for an annual Service of Remembrance for the victims of the sinking of HMS Hawke, at Barrington Gardens.

At Sunday’s service, the poppy net was handed into the care of St Simon’s by Lt Cdr Leslie King, a Bangor based Sea Cadets officer. Raymond formally dedicated it to the glory of God and in memory of those who died. Representatives of Sea Cadets from TS Decoy, Bangor, the GVRT and local ladies who hand-stitched the poppies were present. The ropework on the poppy net was done by Brian Higgins, TS Decoy, Bangor. 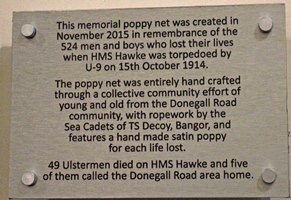 Plaque commemorating those who died and the significance of the poppy net.

The wall at Barrington Gardens is now decorated with a mural featuring a facsimile of a photograph of HMS Hawke.

An information plaque already in place at Barrington Gardens was unveiled on Remembrance Sunday. It has information on the crafting of the ‘Poppy Net’, short biographies and photographs of the local men who died that day, eye witness accounts of the sinking, the names of all who perished, and a short biography of the Captain of the U Boat which launched the torpedoes.

Raymond said this new artwork meant a lot in the local community. “It is very important, particularly at the moment when a lot of the people in these areas feel they are being ignored,” he said. “The plaque and the mural of HMS Hawke on the gable wall at Barrington Gardens will hopefully present a new outlook for both residents of the area and the thousands of people who use the Donegall Road on a daily basis.”

It is hoped that moving the artwork inside the church will preserve and protect it for generations to come.

“We hope that people will want to visit the church to look at the artwork,” said Raymond. “If the church is not open, access can be arranged by contacting me directly or Mrs Angela Johnston in the GVRT Office.”