Church of England Synod was ‘an occasion to remember’ – Dean Bond 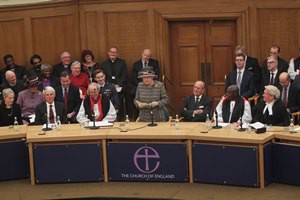 Dean Bond (in red) on the platform during Her Majesty’s opening address to the 10th Inaugural General Service of the Church of England. Photo: Andrew Dunsmore / Picture Partnership.

The Dean of Connor, The Very Rev John FA Bond, said it was an honour and a privilege to represent the Church of Ireland at the Inaugural Service of the 10th General Synod of the Church of England at Westminster Abbey on Wednesday November 24.

Her Majesty the Queen opened the Synod in the presence of delegates including Dean Bond, who was on the platform for the proceedings. The Dean and his wife Joyce then attended an Ecumenical Lunch hosted by the Presidents of the Synod.

Dean Bond, who retires as rector of Skerry, Rathcavan & Newtowncrommelin in January after 48 years of ministry in Connor Diocese, was asked to attend the General Synod by the Standing Committee of the Church of Ireland.

Here he shares his experiences of his visit to the 10th Inaugural General Service of the Church of England.

It was a great privilege and honour to have been invited by Standing Committee to represent the Church of Ireland at the Service for the Inauguration of the 10th General Synod of the Church of England in Westminster Abbey on 24th November. It was a service and a day to remember. The Abbey was full and the security following the recent horrific and tragic events in Paris was discreet. Her Majesty The Queen and His Royal Highness The Duke of Edinburgh were received at the Great West door by the Dean and Chapter of Westminster. During the opening hymn “Christ is made the sure foundation” the procession moved to the east end of the Abbey. 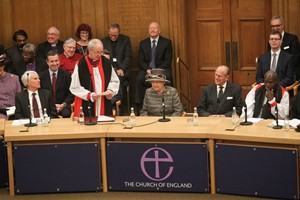 Dean Bond is just behind the Archbishop of Canterbury during the opening of the Synod. Photo: Andrew Dunsmore / Picture Partnership

Every five years the newly constituted Convocation of the House of Laity are summoned to an Inaugural Service of Holy Communion at Westminster Abbey. Afterwards they assemble in the Assembly Hall in Church Hall. By custom the Archbishop of York reads the Gospel at the inaugural service of a new Synod, on this occasion he invited the Bishop of Stockport, The Rt. Rev. Libby Lane, who in January became the first woman to ordained bishop in the Church of England, to do so. The Most Rev and Right Honourable Justin Welby Archbishop of Canterbury, Primate of All England and Metropolitan, presided and was the celebrant. The Address was given by Father Raniero Cantalamessa OFM Cap, Preacher to the Papal Household.

The General Synod comprises of 470 voting members of whom nearly 60 (including the Archbishops of Canterbury and York and other diocesan bishops) are members by virtue of their office and 410 are elected for a five year term.

The singing by the choir was inspirational, in an inspirational setting and added enormously to the powerful atmosphere. Following the sharing of The Peace the hymn “Come down O Love divine” was sung with great feeling and the Archbishop led the Eucharistic Prayer. When Holy Communion had been administered, the congregation remained seated to sing Graham Kendrick’s “Beauty for brokenness” and which seemed most appropriate against the backdrops of world events. After a period of silence the hymn “Glorious things of thee are spoken” was followed by the final blessing and the National Anthem.

What made the service special was the careful and thoughtful preparation put in by the Dean and Cathedral Staff, the Choir, the organist and the careful attention to detail. For me, it was a joy and privilege to worship the Lord in the beauty of holiness and in the holiness of beauty on this significant occasion. The wonderful sense of reverence and thanksgiving was awesome in all the pomp and ceremony. With the representatives of the other churches and of ecumenical bodies I was sitting almost opposite the Queen and Prince Philip. My wife Joyce and the Chief Officer and Secretary of the R.C.B. Mr Adrian Clements and his wife Patricia were sitting three rows behind the Queen and the Duke. 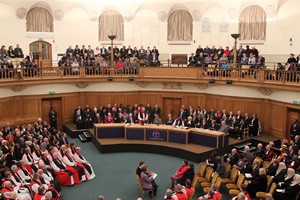 In his address, Father Raniero made an impassioned call for unity among Christians, urging people not to remain “prisoners of the past” by trying to establish each other’s rights and wrongs. He continued, “In many parts of the world people are killed and churches burned not because they are Catholic, or Anglican, or Pentecostals, but because they are Christians. In their eyes we are already one! Let us be one in our eyes and in the eyes of God”.

Following the service the Archbishop of Canterbury welcomed the Queen and Duke to the Assembly Hall and the Queen addressed the Synod and spoke of the need for the different Christian Churches to work together.

Loyalty to the Queen is something which is often proclaimed but we should never forget her loyalty to her people and to God. For over 60 years this remarkable lady has served her people not only of the UK and NI but of the whole Commonwealth. Two days after the service she was in Malta, The Queen is steadfast in her Christian faith and at a time when faith is being challenged and compromised she is a role model to the nation that faith is important and we should never be ashamed of our Christian heritage. During the Queen’s visit to Cork, the fish merchant was right when he said: “You people should be so proud of that lady, she has never put a foot wrong.”

It was a great privilege to be part of the platform party and this was followed by lunch at the invitation of the Archbishop of Canterbury.

After the lunch I sat in on a session of Synod and was much impressed by the way business is conducted in our sister Church.

It was a wonderful opportunity to meet with so many representatives of the Church – Methodist, Baptist, Roman Catholic, Church of Scotland, Russian Orthodox, Syriac Orthodox Church, Lutheran. Old Catholic Church, Scottish Episcopal Church, Church in Wales, New Testament Church of God, Moravian, United Reformed Church, Bishops, Archbishops and Lay people. The warmth and friendliness of the occasion will live long in memory, and also the affection, respect and high regard in which our Church of Ireland is held.

Joyce and I met with great kindness and courtesy and came away feeling that despite our theological idiosyncrasies we are all children of one Heavenly Father.  We met some old friends and in the few days in London made many new ones. It was an occasion to remember and again my grateful thanks to the Standing Committee for the invitation to represent our Church. It was a wonderful ending to over 48 years in Parish Ministry!

P.S. I still hope a visit to General Synod by a senior royal will happen!!