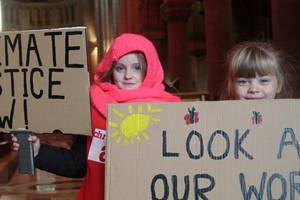 Two young Christian Aid supporters get their message across at the service in St Anne’s Cathedral.

A large number of people attended an ecumenical service of prayer and reflection for climate justice held in St Anne’s Cathedral on November 29 before a rally on climate change. (See our photo album below).

The service and rally in Writer’s Square, opposite the Cathedral, was held on the eve of UN climate change talks in Paris.

The service was organised by Christian Aid and Trócaire in partnership with St Anne’s. The speaker was the Rev Canon Mike Parker.

In a talk which was commended by many who attended both the service and rally, Canon Parker posed the question: ‘What do we do knowing what we know?’

“We are witnesses today. We gather to worship and to witness for our brothers and sisters around the world. Trocaire and Christian Aid, we give a voice to those clinging to the edges,” Canon Parker said. “We give a voice to those whose lives have been shattered by climate change. Maybe we think we don’t see it yet in our society but climate change is a constant reality. A devastating reality for the poorest of our world.”

He said climate change affected the poorest of the poor first, but it would one day come to everyone. 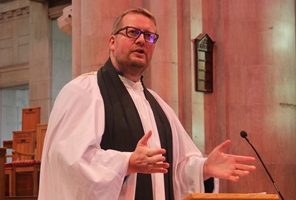 The Rev Canon Mike Parker delivered a powerful talk on the ‘devastating’ impact of climate change at the service in St Anne’s.

“We worship today inside this historic St Anne’s Cathedral. But this whole area used to be the docks. We are close to the sea in this city. We are close to the sea and the sea level is rising. Contingency planning for flooding in this city must be our new reality. We might look to our politicians, to ‘the folks on the hill’ for solutions. The ‘folks on the hill’ need to act. If they wait until the water reaches them before they pursue environmentally responsible policies Belfast will be sunk.”

You can download the full text of the Talk by Canon Michael Parker.

Representatives of several churches took part in the service including the Dean of Belfast the Very Rev John Mann; Church of Ireland Bishop of Down and Dromore the Rt Rev Harold Miller; Father Colin Grant from the Roman Catholic Church; the Rev Richard Kerr, Presbyterian Church, the Rev Brian Anderson of the Methodist Church, Ms Beate Hahn of the Lutheran Church and Dr Clare Amos, World Council of Churches.

The rally after the service attracted around 300 people of all ages. It featured music from Beyond Skin and speakers from a range different interest groups and backgrounds, who all have a reason to be concerned about the impact of climate change. They included Friends of the Earth, Eco Congregation Ireland, Butterfly Conservation NI, Oxfam, surfer Dan Lavery and farmer Frank Ellison. Canon Parker read a poem on the impact of climate change. 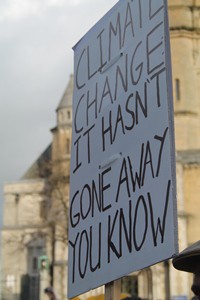 A message in the square outside St Anne’s Cathedral during the rally on climate change.

Each speaker brought an item for a suitcase to be delivered to Northern Ireland’s environment minster Mark H Durkan MLA, who is attending the UN talks which got underway in Paris on Monday November 30.

The Rt Rev Trevor Williams, retired Bishop of Limerick and Killaloe and chair of the Board of Christian Aid Ireland, attended the service and the rally and the Rev Mike McCann, rector of Kilroot and Templecorran, was at the rally with his wife Sarah. Mike and Sarah spent last summer on sabbatical in the Arctic, and saw at first hand the effects of climate change.

Mike said: “We have been supporters of Friends of the Earth for many years. The care of the earth is part of our Christian witness and we wanted our voices to be heard.

“We came close and personal to the difficulties people in the Arctic face in terms of climate change, and the impact the ice breaking up has on the polar bears.

“It was great to see people of all ages and persuasions at the rally. This is an issue for the whole world and something Christians and non-Christians will have to tackle together.”

Sunday’s service and rally were part of a day of action staged by climate activists in cities around the world including Dublin, Cork, London, Edinburgh, New York, Paris, New Delhi, Sao Paulo and Rome.

Organisers of the service in St Anne’s Cathedral made the following comments in relation to climate change: