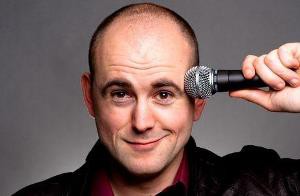 Comedian Andy Kind will appear at Lisburn Cathedral on February 18.

Lisburn Cathedral is to host a night of laughs in February with award winning comedian Andy Kind.

Proceeds from the event will help support a Cathedral team going on mission to Yei, South Sudan, next summer.

Andy Kind won Anything for Laffs in 2005. His stand-up style can best be described as ‘the joyful rant of a post-30 chaos vacuum,’ and he has been featured on BBC1, ITV, Channel 4 in the UK. Not long after supporting Tim Vine, Andy’s first book ‘Stand Up and Deliver’ was published by Lion Hudson. The sequel, ‘The Gig Delusion’ was released by Wilmot Books and Andy released his third book ‘The Unfortunate Adventures of Tom Hillingthwaite’ (his second with Lion Hudson) last March.

He recently hosted successful residences at New Wine 2013 and Spring Harvest 2014. Soon after, Andy toured a series of churches in South Africa alongside Mark Palmer.

Andy Kind will be in Lisburn Cathedral on Thursday February 18 2016 with the show starting at 7.30pm. Tickets are £5.