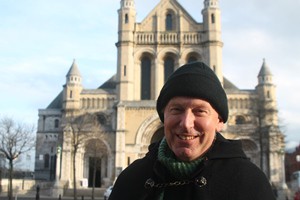 Belfast’s Black Santa, the Very Rev John Mann, is shaking out and airing his hat, scarf and gloves in preparation for his fifth charity sit-out on the steps of St Anne’s Cathedral.

The 39th annual Black Santa sit-out gets underway at 9am on Wednesday December 16 and the Dean of Belfast is looking forward to once again meeting those who drop money into his barrel so generously every year.

As always he will be supported by the Bishops of Connor and Down and Dromore and members of the Cathedral Chapter.

If you would like to support the Dean and his dedicated Black Santa team, but don’t think you will be in Donegall Street in the week before Christmas, you can still make a donation. Download the Dean’s letter and donation form here

The letter introduces some of the many, many charities who benefit from the Black Santa Appeal (more than 200 cheques are presented each year). In it, Dean Mann states: “As I appeal to your generosity once again I would like to say how heart-warming it is to be part of such an important tradition for Belfast; a tradition that is not just about raising and distributing money, but a tradition which brings people together.

“We are in challenging financial times, but I believe that we can make a real difference once again this Christmas.”