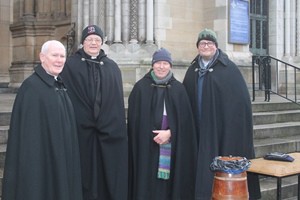 From left: The Rev Campbell Dixon, Canon Robert Jones, Dean John Mann and Canon Michael Parker on the steps of St Anne’s on the first day of the 2015 Sit-out.

Belfast’s Black Santa took up his position on the steps of St Anne’s Cathedral as the 39th annual Sit-out for charities got underway at 9am on Wednesday December 16.

In undertaking the Sit-out, the Dean of Belfast, the Very Rev John Mann, maintains a Christmas tradition established by Dean Sammy Crooks in 1976.

And this year Black Santa will be employing new technology to help raise funds – a credit/debit card facility will be sitting alongside his traditional barrel!

As he prepared for this, his fifth sit-out, Dean Mann said: “Like many another annual events it never seems like a year, but the gloves and hat, cloak and scarf are ready. Sadly, Florence who knitted the scarf especially for my first sit-out in 2011 is no longer with us, but I will think of her and her kindness as I wind it around my neck (about three times!) to keep out the wind and rain.”

The Dean continued: “Some gifts we thank others for again and again. It’s the story of Black Santa really. Do we tire of it and suffer charity fatigue? I hope not. The gifts that are given are used for the benefit of many, and that need has not diminished.

“Already some cheques have arrived, and this year, by way of moving things on, I have been provided with a card reader terminal at the barrel. Can you believe it? Would Dean Crooks 39 years ago have imagined that a piece of plastic could be read to make a donation?

“But in the end it is down to generosity, goodwill and concern for others. Those things don’t change – ever!”

Dean Mann will stand on the steps of St Anne’s, come rain, hail or snow, every day until Christmas Eve and will be supported by members of the Cathedral Chapter.

If you would like to support the Dean and his dedicated Black Santa team, but don’t think you will be in Donegall Street in the week before Christmas, you can still make a donation using the form attached to the Dean’s Letter