Young people from Lambeg Parish sleep out for Abaana 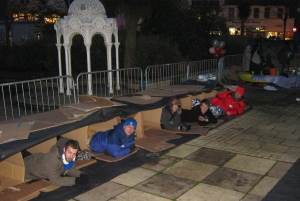 On Friday December 11, six young people from Lambeg Parish, along with their youth leader took part in the Challenge 48 Sleepout with Abaana – a charity which supports street children in Uganda.

The aim of this challenge was to give people an idea of what life would be like for those living on the streets in Uganda but also to raise money and awareness of the charity and the work it does.

The sleepout took place in Bangor, and the group from Lambeg arrived around 7pm on Friday evening and started settling into what was going to be their home for the night – a cardboard box with a black tarpaulin over it to make it somewhat waterproof.

As the night went on more groups started to arrive and eventually there were around 36 participants. The only money they had on them was a couple of 20p pieces for the public toilets and so the young people were reliant on the generosity of passers by donating food and hot drinks. Everyone huddled around the fire pit as this was the only source of heat.

Parish Youth Leader Aimee Gibson said: “Members of the public were very generous as they donated tea and coffee, chips and pizza. Thankfully it wasn’t as cold as had been forecast, but being outside for a long period of time, everyone began to feel very cold.

“Around 2am everyone started to filter off into their boxes – they weren’t the most comfortable but it was better than being outside. 5am came and so did the rain, it got so heavy that the boxes started to give way to the weight of the rain.”

Aimee said a few groups ended up going home early due to their boxes being completely flooded.

For those who were lucky enough, only their feet got a little damp. Everyone was up by around 8am due to the wet conditions. The fire pit was very quickly re-lit and one of the local coffee shops brought over fresh tea and coffee. The group was able to take shelter under some gazebos that were brought down and enjoy bacon butties that were also donated.

Lambeg Parish was one of the first groups to be heading home, leaving at 12noon on Saturday, and so they took the first slot for street collection – based on Bangor’s main street.

Aimee said the young people thoroughly enjoyed this experience but found it very challenging. Some of their comments were:

“It was very eye opening and made me really appreciate what I have.”

“We only had to stick it out for one night, while there are loads of young people doing this on a daily basis – really hit home.”

“We saw some homeless people while we were doing the challenge and I now can relate on some small level and sympathise as now I have had a glimpse at their conditions and what they actually go through.”

“It was a really horrific experience, especially when it rained and many of the cardboard boxes were flooded and falling in on us.”