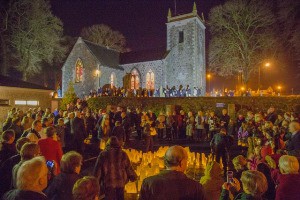 Lanterns in the car park of St Patrick’s, Broughshane, after the Advent Service which brought the 250th anniversary celebrations to a close.

St Patrick’s Church, Broughshane, concluded its 250th Anniversary Year with an Advent Service – ‘Christ the Light in the Community.’

The service was conducted by The Very Rev John Bond, Dean of Connor, and the Rev Adrian Halligan, Curate. The lessons were read by the Bishop of Connor, the Rt Rev Alan Abernethy and the Mayor of Mid & East Antrim, Councillor Billy Ashe.

At the end of the service a lantern was carried out of the church by Abigail, followed by children, young people and the congregation carrying their prayer lanterns. These were then displayed in the shape of a Cross in the church car park.

The congregation was invited to write a prayer and place it in each lantern and the proceeds were given to Macmillan Cancer and the Lighthouse, Ballymena.

Families were then invited to take a lantern home and include it in their Christmas decorations.