Service of Thanksgiving in Broughshane as Dean Bond retires 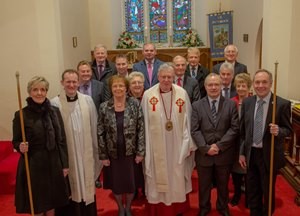 Members of the Select Vestry of the Parish with Dean Bond.

The Parish of St Patrick, Broughshane, held a Farewell Service of Thanksgiving on January 10 for the ministry of The Very Rev John FA Bond, Dean of Connor and rector for almost 17 years.

Dean Bond officially retires on January 31. Ordained in 1967 for the curacy of St Paul, Lisburn, Dean Bond served as curate of Finaghy – St Polycarp’s, from 1970-1977. He became rector of the Parish of Ballynure & Ballyeaston (Ballyclare) prior to his appointment to the Parish of Skerry, Rathcavan & Newtowncrommelin (Broughshane). He was appointed Dean of Connor in 2001.

Dean Bond has been a member of General Synod since 1978 and has served on many committees and held different positions in the Church of Ireland. During his ministry an extension was added to St John’s, Ballyclare, and an extension to St Patrick’s Parish Hall in Broughshane. 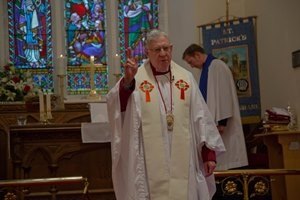 In his farewell address, the Dean said it had been a privilege to minister and serve in the various parishes over the years and to visit people in their homes. He said he was ‘humbled by the dignity, resilience and sheer bravery’ of so many in ‘their own personal Calvary situation.’

Dean Bond paid tribute to the Wardens, Youth Leaders, Sunday School Teachers, Select Vestry, Organist and Choir and those behind the scenes who ‘laboured sacrificially’ and contributed so much to the Church. He asked the congregation to remember the Curate, the Rev Adrian Halligan and the Parochial Nominators as they set about the appointment of a new rector. 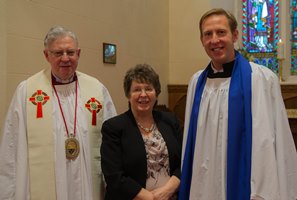 The church was packed for the Service of Farewell and Thanksgiving, with an overflow of people accommodated in the Parish Hall.

Dean Bond told the congregation: “The Church is not about me or you, it is about God, the creator of Heaven and earth. Sadly, we live in a day when many people think too little of God and too much about themselves. The Church must be a place of welcome for all regardless of creed, class, colour or gender orientation. The Church must be open too, otherwise we are in danger of becoming a holy huddle or cosy clique on our terms and that has nothing to do with Christianity.”

The Dean said Jesus never gave up on anybody and was always ready to forgive, to renew, to re-shape lives and build people up in the strength of God the Father.

“I have always believed that the best evangelism is warmth and friendship and showing a genuine interest in people,” Dean Bond said. 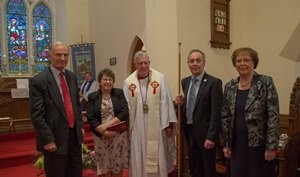 Mrs Megan Nelson Hon. Secretary Select Vestry and Mr Richard Reade, St Patrick’s, Broughshane, who made a Presentation to the Dean of Connor, The Very Rev John Bond and to Mrs Joyce Bond, with Mr Winston Byers, Rector’s Warden at the Dean’s Farewell Service. He will retire on January 31.

He added: “I have been privileged to be part of your lives as your rector and Joyce and our family thank you all for your kindness, support, prayers and Christian love.”

Tributes were paid to the Dean for his pastoral care, compassion, friendship and dedicated ministry and also to Joyce for her outstanding work in the parish over the years. She is Vice-President of Connor Mothers’ Union and President of Women’s Link.

The Dean and Mrs Bond replied suitably and thanked everyone for their gifts and generous thoughts.