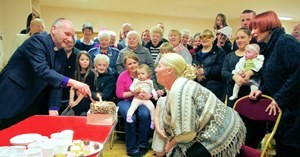 Mandy Pyper blows out the fifth birthday candle after the anniversary service in Whiterock.

St Columba’s, Whiterock, celebrated the fifth anniversary of the consecration of the new building on Sunday January 17.

The Bishop of Connor, the Rt Rev Alan Abernethy, was the preacher at the service, and was accompanied by his wife Liz.

Parishioners stayed behind afterwards for cake and a tea and coffee, and Mandy Pyper, who leads the Whiterock Sunday School, was nominated to blow out the birthday candle.

Thanks to Mr Eddie Stone, a parishioner who has been a member of St Columba’s from the original building in 1948, for the photograph.