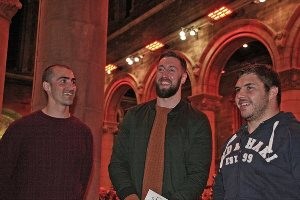 More than 1,000 people were in St Anne’s Cathedral on Monday January 25 to hear three Ulster rugby players talk about their sporting careers and their Christian faith.

The event was jointly organised by Christian Vision for Men (CVM) and Interdenominational Divine Healing Ministries, and took place in the context of the weekly divine healing service.

Ruan Pienaar joined Ulster from Natal Sharks in 2010 and was a member of the Springboks team which won the Rugby World Cup in 2007.  Wiehahn Herbst was signed for Ulster, also from the Sharks, in 2014.  Peter Browne, who previously played with London Welsh, is in his first season with Ulster.  His father, the Rev Leonard Browne, is a Church of England minister who is originally from Northern Ireland.

Ulster Rugby Chief Executive Shane Logan was interviewed by CVM’s Ireland Director, Gareth Murphy, about how he came to faith after seeing God answering prayer in difficult situations.  “Life only makes sense when you live the way you’re designed to live,” Shane remarked.

The three rugby players were introduced and interviewed by BBC journalist Mark Simpson. 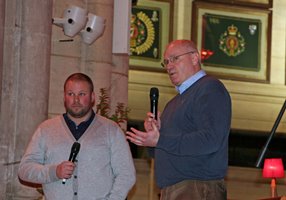 Wiehahn Herbst related how he received assurance from God after experiencing injuries on the pitch: “Every time, God gives you strength and gives you courage to just go through that challenge.”  On living the Christian life, he added: “It’s not always easy but you have got God there for you.  In a difficult situation, he gives you the power and peace that the world can’t imagine.”

Ruan Pienaar explained that he prayed for God’s protection and favour over the team before each match and also for his family. “I think it’s a small way to say thanks to God for giving us the talent,” he said.

Ruan said he sensed that God had opened a door for him to come to Ulster to spread the gospel as well as to play rugby. “Whenever you go to ask him for forgiveness and to come into your life, he’ll always answer and respond.”

Peter Browne mentioned that his attitude is to play for an audience of one. “It’s not about me.  It’s about God and doing my best for God to the best of my ability,” he said. Peter related how he came to faith at a New Wine camp when he realised how sin was preventing him from having a relationship with God, and that God’s grace – shown through the Cross – was ‘beyond comprehension.’

The divine healing service marks its 23rd anniversary next Monday night, February 1, and is an opportunity for anyone to come and seek God’s presence and blessing in their lives.