NvTv report highlights launch of the Guide in St Anne’s 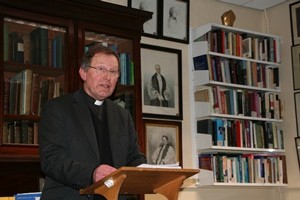 Dean John Mann speaks at the Belfast launch of the Guide.

Belfast based Northern Visions Television (NvTv) has produced a news report on the launch of the Church of Ireland’s Select Committee on Human Sexuality in the Context of Christian Belief’s Guide to the Conversation.

The Northern Ireland launch took place in the Library at St Anne’s Cathedral on January 19, and the NvTv report includes interviews with the Dean of Belfast, the Very Rev John Mann, Chairman of the Select Committee, and the Most Rev Dr Richard Clarke, Archbishop of Armagh.

The Bishop of Connor, the Rt Rev Alan Abernethy, and the Archdeacon of Belfast, the Ven George Davison, were among representatives of Connor Diocese who attended the launch.

The Guide is a new resource designed to assist members of the Church in the ongoing process of listening, learning and dialogue on the issue. It outlines the process to date along with contextual essays and contributions from different viewpoints.

You can watch the NvTv report on the launch of the Guide above. The report begins one minute 29 seconds into the progamme.

For further details of the launch of the guide in Dublin and Belfast, see http://ireland.anglican.org/news/6137

Dean Mann has also been interviewed by RTE in his capacity as Chairman of the Select Committee. A short version of this interview is due to be broadcast on Leap of Faith – just after the 10pm news on Friday February 12, and a longer one on Sunday February 14 during the Sunday Spirit programme between 10am and 1pm, both on RTE Radio 1.