Peter Barrett ‘touched the lives of so many’ – Bishop of Connor 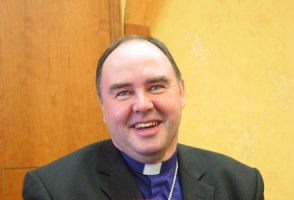 Speaking at a memorial service on Sunday January 31 for the Rt Rev Peter Barrett, the Bishop of Connor said he had been a man who ‘touched the lives of so many with his openness and compassion.’

The former Bishop of Cashel and Ossory died suddenly on October 28 2015. He had served in the Diocese of Connor in the Parish of St George’s, Belfast, from 1990-1994, and the memorial service was held in St George’s

The Rt Rev Alan Abernethy said Peter was ‘a very dear friend,’ and in his address at the memorial service, he recalled their first meeting, almost 40 years ago.

Dublin-born Peter served as curate-assistant in St Ann with St Stephen and as Dean of Residence of Trinity College in the Diocese of Dublin and Glendalough. He also served in the Dioceses of Derry and Raphoe as well as in Connor.

I had just finished unpacking and moving into my room in what was then the Divinity Hostel and as I walked along the corridor towards the infamous notice board and the dining room, I met Canon James Hartin, talking to another new student. He introduced me to Peter Barrett, stating with his usual smile, you will become best friends. Peter and I probably didn’t like being told who we might become friends with but how true Jim’s words were to prove.

During our time in college we became inseparable until Peter and Anne were married just before the beginning of our final year. I learnt the rigour of hockey training and as a soccer player learnt a new respect for hockey players. We shared so much of the struggle and joys of ordination training. My difficulty with church from my childhood was tempered by Peter’s love of church. My strong Northern influences were tempered by Peter’s gentle openness and acceptance of others. I see now so clearly how important our friendship was for both of us. Although his whistling of hymns first thing in the morning was something that tested friendship and was one of the reasons he was known as “Perky Peter”.

There was a moment during the first term in the hostel that cemented our friendship. Peter kept telling me during those weeks that his father wanted to meet me as he knew my paternal grandparents. My father disappeared when I was six and my paternal grandparents died before I was three. I was intrigued to meet someone who could shed light on my family history. I borrowed a car and we drove to Glenageary to meet Alec Barrett senior on the last Wednesday night of term, I was going home the following Saturday. We spent three or four hours with Alec, chatting and he was able to tell me that my grandparents had stayed in the Barrett family guest house in Dun Laioghaire before Peter’s mum died. The Barretts had visited my grandparent’s home in Hillhall, near Lisburn, and they had shared interests in pigeons and dogs.

We came back to college on a high but in the early hours of Thursday morning Peter was knocking my door to tell me his dad had died during the night with a heart attack, and we drove back to the home to face the reality of death and loss.

That was 1978 and nearly 40 years later we are gathered here because of another heart attack, still trying to come to terms with Peter’s sudden and unexpected death. My thanks to you his family for inviting me to speak today, I was unable to be at Peter’s funeral as I was out of the country and this is a parish where Peter is still remembered with love and thankfulness. Every time I come here there were those who would ask me about Peter and would ask me to tell him he and his family were always in their prayers.

In thinking about Peter I want to reflect on the gospel reading and confess it is a favourite one of mine. It is a very human account of a strange, unusual, difficult and important journey. The disciples are in a difficult place. They are trying to make sense of their call, of the sudden and bewildering end to their dreams. They are in shock and grieving for what they have lost, the one they followed, trusted and loved. These are very real and painful human emotions. As they journey they are wrestling with the scriptures and telling their story. Throughout our friendship Peter and I wrestled with our faith, our questions, our disagreements, our own personal history and the friendship was such a gift as we helped each other on the journey. As Peter moved from parish to parish, to university chaplaincy, to a deanery and then to become a bishop, the journey took him to strange places but it gave us much to talk about and share. We often did as the disciples did and wrestled about the scriptures in trying to make sense of ministry, discipleship and the complexity of being human. Peter in parish ministry journeyed with many people who found his presence a blessing as he gave of himself to them. His compassion, understanding and lack of judgement drew people to him and to the one who walked with him. There are those here who can testify to that ministry of presence.

During the last ten years that journey was more difficult. He never could fully understand why his life had unraveled. He had caused such pain to his family and confusion to so many others. As he journeyed there was healing and restoration but there was still something in Peter that was never quite the same again. As I reflect on the Emmaus journey there is one element of the story as told by St. John that I find encouraging and profoundly true for the journey that Peter was on. As the disciples travelled the stranger walked with them and Jesus had been there even when they were unaware of his presence. That was true for Peter and slowly but surely he had found his faith renewed and he had found some peace again. Throughout our lives Jesus is present and it is important to remember that in the difficult times that presence is still there in the context of the eternal love that knows no bounds.

As this account of the resurrection moves to a climax there is the moment of realisation and wonder. In the breaking of the bread they recognise our Lord. In that Eucharistic moment everything is change and nothing can be the same again. One of the great gifts that Peter and I shared was the joy of breaking bread, the moment when God takes the ordinary and makes it special. In the taking, breaking and blessing grace becomes real and tangible. The Eucharist is somewhere where our brokenness is taken, blessed and restored as we encounter the Living Christ in His presence among us.

For those who loved Peter he will be missed, his boyish sense of fun, his stubborn streak, his humility, his faith that was tested and his brokenness that meant he touched the lives of so many with his openness and compassion.

May you his family find comfort and peace in the pain of loss and be assured of the love and prayers of many, many people.

May Peter rest in peace and rise in glory.