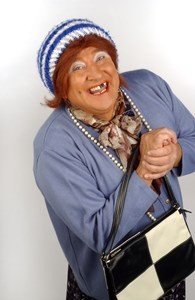 May McFettridge will help hand out the Black Santa cheques.

More than 220 charities will this weekend benefit from money raised during the 2015 Black Santa Sit-out on the steps of St Anne’s Cathedral.

The 39th annual Sit-out raised £195,000 and at the annual Good Samaritans Service on Sunday February 7, well-loved local comedians May McFettridge, Jimmy Cricket and William Caulfield will give up their time to present cheques to charities and community groups who strive to make life better for others.

This was Dean John Mann’s fifth Christmas Sit-out as he maintains a tradition established by the late Dean Sammy Crooks almost 40 years ago.

The Good Samaritans Service takes place on the first Sunday in February each year, which the Dean said was “always a happy day in St Anne’s Cathedral.”

Smiles are definitely guaranteed this year with the line-up of special guests!

Dean Mann said: “More than 200 charities will benefit, representing a huge amount of voluntary and community work.  This must be one of the most comprehensive gatherings anywhere in Northern Ireland of a spectrum of charitable work taking place, from organisations aiding young people to those supporting the elderly, from those struggling with medical conditions to those working in reconciliation and healing in its broadest sense. They include many cross-community initiatives and those working in places of social deprivation.

“It is a celebration of much that is good and praiseworthy in our community, and an opportunity to thank those who turn money into action and goodwill into improving the lives of others.  It is a privilege to be part of it.”

May McFettridge will certainly add glamour to the occasion. Northern Ireland’s very own queen of comedy, May has earned a special place in the hearts of audiences young and old alike with her distinctive brand of affectionate but well aimed gibes and witticisms.

Recognised as one of the greatest character acts to emerge from Northern Ireland over recent years, May’s unique ability to involve audience members in her shows have made her one of the most popular and best loved comic performers in the country.

You can also read about May’s alter ego, John Linehan. 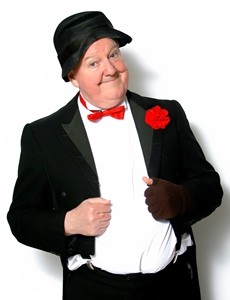 Jimmy Cricket will be at the Good Samaritans Service on February 7.

Cookstown born Jimmy Cricket started his career working as a Butlin’s Redcoat. He later worked in Pontin’s where he started to develop as a comedian.

In the early 1980s, Jimmy won ITV’s television talent contest ‘Search For A Star’ and was later given his own television show called ‘And There’s More,’ broadcast over four series between 1985 – 1988.

Jimmy has had other numerous television appearances and has featured on the Royal Variety performance. He had his own radio series on BBC Radio 2 during the 1990s called ‘Jimmy’s Cricket Team.’ His first live standup comedy DVD called ‘Jimmy Cricket – Pull your seats forward’ was released in early 2010. Jimmy has also written three musical shows.

His best-known catchphrases include ‘come ere!’ and ‘…and there’s more!’ Of course, he is instantly recognisable for the attire he wears, which includes a funny hat and his trademark wellies on the wrong feet.  In 2015 Jimmy made a long awaited appearance in a feature film called ‘Womble the Movie.’ 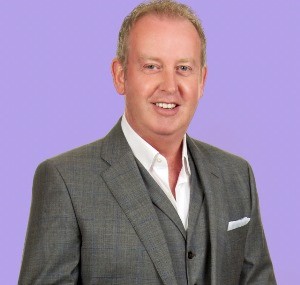 William Caulfield is one of three local comedians to support the Good Samaritans Service on February 7.

William Caulfield is one of Ireland’s best loved and busiest comedians.  With a keen eye and ear for all the things that make us laugh, and with his home grown style of humour, William has endeared himself across all the generations.

From early days writing comedy monologues for the BBC, he progressed to having his own prime time BBC 1 TV series ‘Our William,’ his award nominated BBC Radio Ulster series ‘It’s William Caulfield so it is,’ and most recently ‘William Caulfield’s Workers’ Party’ all proving he knows how to hit the comedy funny bone.

Radio and TV is just a small part of what William does. He is the headline act of the Pantomime every year in the Millennium Forum in Londonderry as well as being a consummate After Dinner Speaker, Awards host and Compere. In recent years he has been a guest entertainer all over the world on luxury cruise ships.

St Anne’s Cathedral is looking forward to welcoming the dozens of charity representatives and special guests on February 7. The service is open to all and gets underway at 3.30pm.