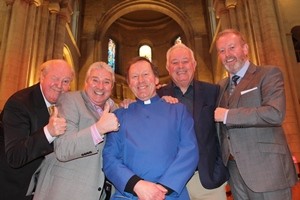 At the annual Good Samaritans Service in Belfast Cathedral on Sunday February 7, more than 220 charities received a share of the money raised during the 2015 Black Santa Sit-out.

The 39th annual Sit-out raised £195,000 and at the service, well-loved local comedians John Linehan, Jimmy Cricket, Gene Fitzpatrick and William Caulfield gave up their time to present cheques to charities and community groups who strive to make life better for others.

This was Dean John Mann’s fifth Christmas Sit-out as he maintains a tradition established by the late Dean Sammy Crooks almost 40 years ago.

The Good Samaritans Service takes place on the first Sunday in February each year, which the Dean said was “always a happy day in St Anne’s Cathedral.”

Smiles were definitely guaranteed this year with the line-up of special guests, who shook hands, posed for photographs and chatted to grant recipients.

The service, which was led by the Dean and featured some beautiful music from the Cathedral Choir and organist Ian Barber, was signed throughout by a volunteer from Action Deaf Youth, one of the many local charities to receive funding from the 2015 Sit-out. 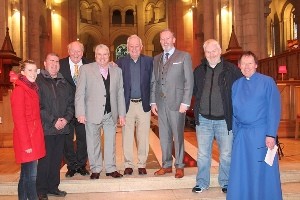 “This must be one of the most comprehensive gatherings anywhere in Northern Ireland of a spectrum of charitable work taking place, from organisations aiding young people to those supporting the elderly, from those struggling with medical conditions to those working in reconciliation and healing in its broadest sense. They include many cross-community initiatives and those working in places of social deprivation.

“It is a celebration of much that is good and praiseworthy in our community, and an opportunity to thank those who turn money into action and goodwill into improving the lives of others.  It is a privilege to be part of it.”

Thanking Dean Mann for his fundraising work on the steps of St Anne’s, Jimmy Cricket told the congregation: “It is heart-warming to see so many charities being honoured here today.”

Jimmy also read a ‘letter from his Mammy,’ much to enjoyment of everyone in the Cathedral. One charity representative later tweeted:

During the service a collection was taken for the 2016 Black Santa Appeal – which will mark its 40th year in December.

A full collection of photographs taken at the service can  be viewed on this link.