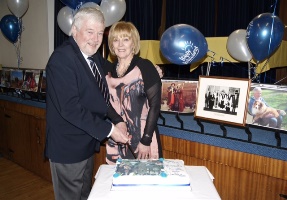 The Rev Canon Kenneth McReynolds and his wife Dorothy cut the cake at a farewell evening organised by Lambeg Parish.

Lambeg Parish said farewell to the Rev Canon Kenneth McReynolds and his family at a social evening on Friday February 12.

Canon McReynolds retired as rector of Lambeg on January 31 after serving there for almost 26 years.  Before coming to Lambeg he served his curacy in Ballymena prior to being appointed rector of Rathcoole Parish.

During his time in Lambeg he presided over arrangements for the major renovation of the parish church including the extension of car park facilities in the church grounds as well as an extension to the parish graveyard.  Under his guidance the Hilden Centre was built and it is now a centre for worship and outreach in the Hilden/Glenmore area of the City of Lisburn. 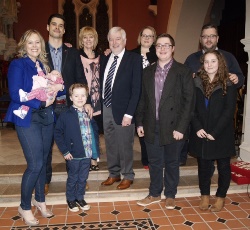 The McReynolds family at the special evening to say farewell to Canon Kenneth McReynolds who retired on January 31 after almost 26 years as rector of Lambeg Parish.

More than 200 parishioners attended and were entertained by individuals and members of parish organisations in a full and varied programme.  For the parish it was a bitter/sweet evening as they bade farewell to their beloved rector and his family and for Canon and Mrs McReynolds it was an evening of nostalgia as they recalled the generations with whom they had served.

At the end of the entertainment presentations were made to Canon McReynolds and Dorothy and the evening concluded with supper.