The Rev Mark McConnell appointed rector of Ballymena and Ballyclug 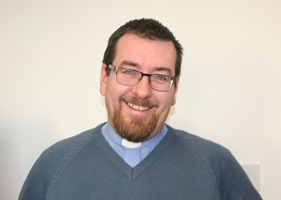 A native of Lisburn, Mark is a former pupil of Lisnagarvey Secondary School and Lisburn Technical College.  He grew up in the Parish of Lisburn Cathedral.

After A Levels, Mark worked in Redmond Jefferson’s hardware store in Bow Street, Lisburn, for two years before moving to the Northern Ireland Civil Service where he held jobs in a number of departments, all relating to industrial development and the export of Northern Ireland goods overseas.

He was with the Civil Service for more than seven years, and it was during this time Mark felt the call to ministry. He moved to north London to study theology at Oak Hill Church of England Training College.

“At the start of the course I was not sure that ordained ministry was for me, but I knew I wanted to serve the Lord and needed a good grounding,” Mark said. “It was while I was at Oak Hill that the call to ordained ministry arrived.

“The then Bishop of St Alban’s, Bishop John Taylor, and the Diocese of St Alban’s took me under their wing, and in my last year I was accepted for Church of England ministry.”

Mark took a year out, during which time he married Cherith, who hails from Omagh, Co Tyrone, and was employed as a church worker in the parish of St James’ in Muswell Hill. “That was a great year of growth and learning,” Mark said.

After his ordination he served a three year curacy in Christ Church Parish, Bedford, before he and Cherith had a call, in 1992, to return home to Northern Ireland.

They moved to Bangor Parish Church, Co Down, with their young son Daniel, where Mark served a second curacy in this very busy church.

His first incumbency was as rector in Killyleagh, Co Down, and he was appointed rector of Ballynure and Ballyeaston in 1999.

“We prayed long and hard about a move, being very happy and blessed as we are in Ballyclare,” said Mark. “We wanted to stay close to our elderly parents, and we wanted Erin, who is 13, to transition gently, we did not want to suddenly unplug her from everything that her world is.

“We were bold enough to pray those prayers and God has answered us amazingly.”

Of his family, Mark added: “We are a unit, a team. I can only do what I do because of the support, tolerance and inspiration of my family.”

“There is apprehension and shock that we have been called to such a charge, yet beyond that very natural human reaction we both have had a sense of peace that we are moving in the direction that God wants us to move and he will provide us with whatever we need to serve Him in our new parish.”

Reflecting on the 17 years he has spent in Ballynure and Ballyeaston, Mark said: “I have built very unique and special relationships with the staff and people. You start out as rector and then you are privileged to become part of the church family. That’s very special to me. The two churches are not places where I go to work, they are places I go to worship, places where we pray together and have seen God in action together, and these are the things I will not forget.”

Mark succeeds the Rev Canon Stuart Lloyd who retired from the Parish of Ballymena and Ballyclug last November.

A date for the institution will be advised in due course.