Drew Buchanan MBE (President of the East Antrim Battalion and treasurer of Holy Trinity Woodburn) welcomed the audience and thanked the band and choir members for providing an evening of great musical entertainment which concluded as the choir accompanied by the band sang, ‘Abide with me’.

Members of the East Antrim Battalion executive served supper during the interval.

Mr Buchanan said: “We have exciting plans to develop the site that will start a new era for BB in Northern Ireland.  We are looking for past members to get in touch and to join us as a Friend of Newport and buying into the future of The Boys’ Brigade in Northern Ireland. 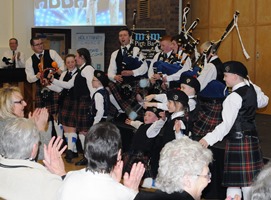 Four members of the Fittis family who are all involved in 8th Carrick BB piping onstage during the concert.

“If you were in BB and would like to help us, please visit our fundraising website where you will find information about the new centre and how you can support us.  The estimated cost of completing the centre to its full potential is £400,000 and boys and leaders in almost 300 companies, comprising the 13 battalions of Northern Ireland, have been actively raising funds in a variety of creative ways.”

Report and photos by John Kelly. 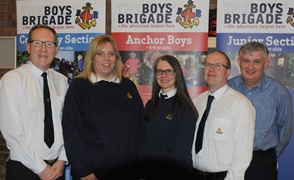