‘An amazing moment in my life’ – Dean Sam Wright 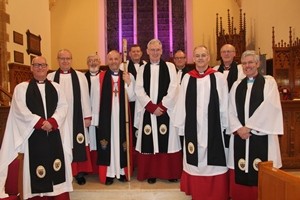 The Very Rev Sam Wright, BTh, MA, was installed as Dean of Connor at a service in Lisburn Cathedral on Thursday March 3.

There was large turn-out for the 8pm service, and the preacher was the Bishop of Connor, the Rt Rev Alan Abernethy.

The new Dean has been rector of Christ Church Cathedral, Lisburn, for 17 years. He previously served a Precentor in the Chapter of St Saviour. The Rev Canon George Irwin, (St Mark’s, Ballymacash), formerly Chapter Treasurer, was installed as Chancellor, and the Rev Canon John Budd (Derriaghy), former Prebendary of Rasharkin, was installed as Treasurer. The former Prebendary of Connor, the Rev Canon George Graham (Dunluce), who was unable to attend the service, is the new Precentor. 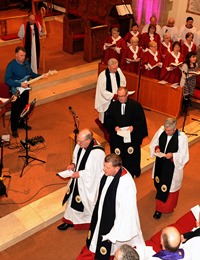 The service of installation in Lisburn Cathedral.

The service opened with the hymn ‘O for a thousand tongues to sing,’ and other hymns were ‘Tell out, my soul, the greatness of the Lord,’ ‘All created things, bless the Lord,’ ‘In Christ Alone,’ and ‘Amazing Grace.’ Psalm 23 ‘The Lord is my Shepherd,’ which was sung at the installation of the previous Dean of Connor, the Very Rev John Bond in 2001, was also sung. The inspiring hymns and worship songs were led by Music Director, Mr Stephen Mc Loughlin and Organist Mr Andrew Skelly.

In his address, the Bishop of Connor spoke about the need for Christians to go out into towns and cities with the light and hope of Christ. He referred to the initiative taken by Lisburn Cathedral parishioners through the Big Church Serve which will run for a third successive year this March. 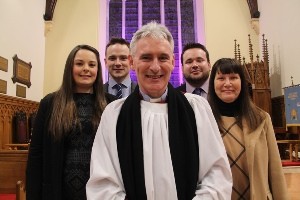 The new Dean of Connor, the Very Rev Sam Wright , with his son Peter and daughter-in-law Vicky, his wife Paula and his son Michael. The Dean’s daughter Naomi was unable to attend the service as she is expecting a baby in May.

The new Dean and his wife Paula have three children. Peter, who is married to Vicky, has two children, Jonah and Summer. Sam and Paula’s daughter Naomi is married to Andrew and lives with their little girl Esther in the Shetland Islands. Their youngest son, Michael helped with the music during the service. Sam and Paula also have two more grandchildren due in the next couple of months.

A former pupil of Bangor Grammar School, Dean Sam worked as a Civil Servant in the Department of Education before going to Trinity College Dublin to study for the Church of Ireland ministry. After leaving Theological College in Dublin he served as Curate Assistant in the parish of St Aidan, Sandy Row, Belfast, Diocese of Connor, from 1987 to 1991 before moving to Co Fermanagh to become rector of the parishes of Cleenish and Mullaghdun. In 1999 he was appointed rector in Lisburn Cathedral where he will continue to serve.

Dean Sam has held a number of positions within the Church of Ireland. He said: “I consider it a great honour to be asked by Bishop Alan to be the Dean of Connor and I look forward to serving in this new role. It is my hope that the Dean and Chapter members will assist the Bishop and Diocesan Development Team in the mission and ministry of Christ in the Diocese of Connor.”

He said he had been overwhelmed with the messages of support and congratulations from his parishioners in Lisburn Cathedral and from friends in other churches and denominations.

The heart of ministry, Dean Sam said, is ‘in and through the local church.’ “It is a great joy to serve in Lisburn Cathedral and to make many good connections with the council and community to share the love, forgiveness and new life that Jesus offers to everyone,” he said.

He added that it was significant that Councillor Thomas Beckett, in his capacity as Mayor of Lisburn and Castlereagh, attended the service as he has been an enthusiastic supporter of the contribution churches make to the community and in particular of the ReLENTless Prayer initiative which this Lent is bringing 18 churches from across Lisburn to pray for the city.

The Dean has a very deep heartfelt belief that the role of the Church is to be engaged in the mission of Christ, both at home and abroad. Since 1976 he has been involved in the work of the Church Missionary Society Ireland, and this July, along with his wife, Paula, he is looking forward to leading a team of seven people from Lisburn Cathedral to the Diocese of Yei in South Sudan as they continue to rebuild after the devastating civil war in their country.

The annual Good Friday walk of witness, arranged by a number of Lisburn City centre churches has a deep significance to Dean Sam as it brings together people from many denominations and walks of life to stand before the cross to worship and remember the death of Jesus as the one and only sacrifice that brings hope and life to all.

After the installation service Dean Sam said: “To be installed as Dean of Connor in Lisburn Cathedral where I have served for the past 17 years is an amazing moment in my life. The presence at the service of so many wonderful parishioners from the Cathedral, members of other churches, alongside good friends, family and clergy colleagues was very affirming and inspiring.

“I am very appreciative of the prayers of so many people as I set out on this new area of service for Christ. My thanks to Bishop Alan for preaching at the service and to everyone who took part in, and made arrangements for, the service and refreshments afterwards.

“Congratulations to the Rev Canon Peter Galbraith and the Rev Canon Christopher Easton who have joined the Cathedral Chapter and to the clergy who have moved to new positions. I look forward to working with all the members and the Bishop and Diocesan Team as we seek to build Christ’s Kingdom and introduce many more people to the wonderful love and grace of Christ.”

Following the service light refreshments were enjoyed in the parochial hall.