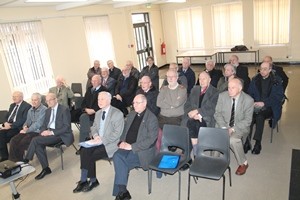 Members of the Retired Clergy Association at their meeting in St Anne’s Cathedral Halls.

Members of the Retired Clergy Association held a Service of Holy Communion in the Chapel of Unity in St Anne’s Cathedral, Belfast, on Tuesday March 8.

This was followed by a talk by the Rev Ron Elsdon entitled Genesis and Geology and focused, Ron said, on ‘how to read Genesis when we know the earth  is very old, not very young.’

Before the 11am Communion Service, the Association members enjoyed tea, coffee and scones in the Cathedral Hall, which they returned to for the talk. 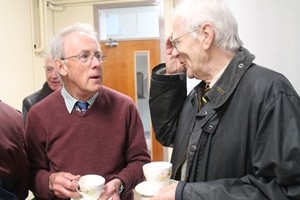 Speaker Ron Elsdon, left, chats to a member of the Retired Clergy Association.

The Association draws members from across Northern Ireland, and meets three or four times a year.

Secretary the Rev Canon Walter Laverty said members would meet again for the annual lunch at Tullyglass House in May, which is also attended by clergy widows and wives. The Association will then hold its September meeting in Armagh, with a visit to St Patrick’s Cathedral and other historical sites in the Armagh area. 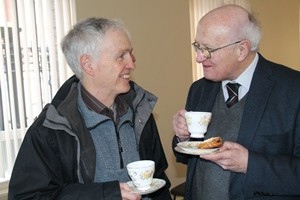 The former rector of Ballymena, the Rev Canon Stuart Lloyd, left, was among those at the Association meeting.

And in November they will head to Bangor Abbey, established by Saint Comgall in 558, for the final meeting of 2016.

The Association is chaired by the Rev John McKeagney.