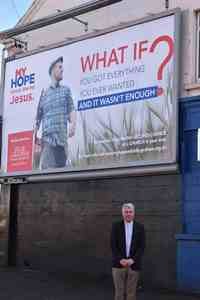 The Ven David McClay at the foot of one of the billboards supporting the showing of the film.

This week saw the launch of a countrywide advertising campaign to promote the Billy Graham film ‘Second Chance.’

The Ven David McClay, Archdeacon of Down and rector of Willowfield Parish, helped to promote the campaign and the film which provides an opportunity for people to pray for friends and invite them along to a showing locally.

‘Second Chance’ features a powerful Gospel message from Billy Graham and compelling stories of transformation from Chris Llewellyn, lead singer for the popular Irish Christian band Rend Collective; Nathalie MacDermott, a doctor from Cardiff who served in Liberia to help people with Ebola and is now at Imperial College, London; and pro-skateboarder Brian Sumner, who was brought up in Liverpool and found global fame with Tony Hawk.