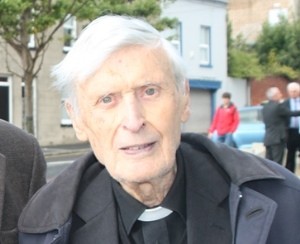 It is with sadness we record the death of the Rev Canon Edgar Turner, Principal Registrar with Connor Diocese.

Over the years, Canon Turner served on numerous diocesan and national Church committees and boards. This included 50-years’ work with the Liturgical Advisory Committee and pioneering ecumenical work, including his involvement with the Northern Ireland Mixed Marriage Association.

He was a life-long follower of the Northern Ireland international football team, travelling to matches all over Europe, and had been planning to travel to France for the European Cup Finals this summer.

Canon Turner was predeceased by this wife Joan four years ago. He is survived by his son Justin and daughter Kate and sympathy is extended to them and the wider family circle.

A book of essays celebrating Canon Turner’s 90th birthday was published in 2010.